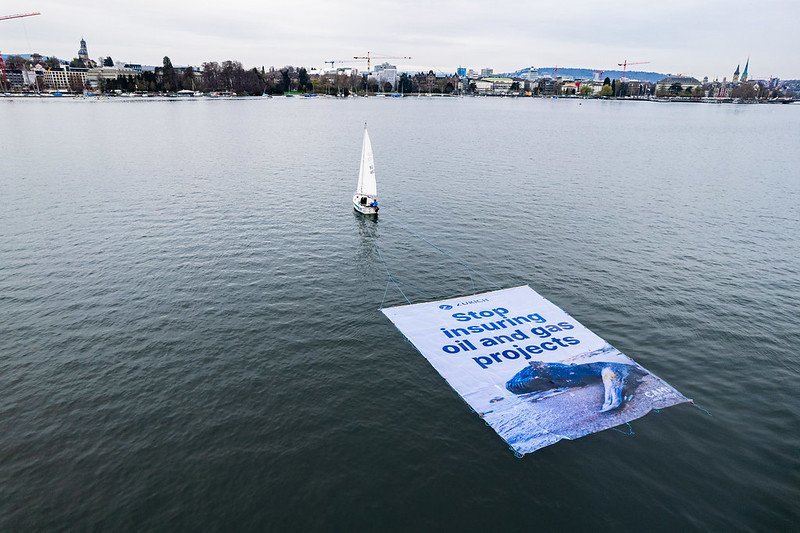 Protestors have taken to the water to urge a leading insurance group to up its commitment to endings its coverage of oil and gas projects.

It came as over 100 organisations wrote an open letter to Lloyd’s urging them to pledge to refuse to underwrite any risks for a controversial African pipeline project.

Shareholders will meet today for the Zurich insurance Group’s Annual General Assembly, and climate protestors took to Lake Zurich yesterday to highlight what they said were the flaw in the underwriter’s underwriting strategy.#

A giant floating banner which read “stop insuring oil and gas projects,” was pulled across the lake to Zurich Group’s headquarters in Zurich Enge, by members of Campax.

The group said as a member of the Net-zero Insurance Alliance, Zurich has committed itself to limiting CO2 emissions in line with the 1.5°C target. However, its current oil and gas policy is “far from sufficient, and it remains one of the world’s largest insurers of oil and gas”.

“In November, Zurich took a small step away from oil and gas with the adoption of a greenfield exclusion policy, but only from companies that do not have ‘meaningful transition plans’,” The group said. “However, this policy still allows them to insure most oil and gas expansion projects without restriction. Zurich must immediately stop insuring all new oil and gas projects if it is serious about its climate promises”

Nora Scheel, campaign manager at Campax explained: “Zurich Insurance is a member of the Net-Zero Insurance Alliance and has committed to limiting CO2 emissions in line with the 1.5°C target. Yet it is among the largest insurers of oil and gas. Climate scientists agree that the 1.5°C target does not allow for further expansion of fossil fuel production. Zurich Insurance must walk its talk and commit to no longer insuring oil and gas expansion projects, as well as ruling out existing fossil fuel insurance in line with a 1.5C phase out.”

In Africa nearly 100 civil society organisations a letter to the Chairman and CEO of Lloyd’s of London asking that they tell their members not to provide (re)insurance coverage for the East African Crude Oil Pipeline (EACOP) project.

Citing a range of severe risks and controversies surrounding the project, and Lloyd’s failure to respond to earlier correspondence from the #StopEACOP campaign, the signatories have requested a meeting with Lloyd’s to discuss the project risks in more detail.

“By releasing this letter publicly, #StopEACOP aims to pressure Lloyd’s to meet with them and to join other major multinational (re)insurers’ Zurich, AXA, Swiss Re, SCOR and Hannover Re in taking a clear position against EACOP,” said a spokesperson..

The letter stated if built the EACOP will be the longest electrically heated pipeline in the world.

“The pipeline and associated oil extraction projects will impact the land of over 100,000 individuals in Uganda and Tanzania, threatening communities that rely on farming for their livelihoods and for survival. Thousands of project-affected families are already facing food insecurity, having been deprived of the use of their land to produce food and cash crops for several years without any compensation.“

“The project poses extensive threats to one of the world’s most ecologically diverse regions, and the communities who rely on it: the pipeline would disrupt nearly 2,000 square kilometres of protected wildlife habitats critical to the preservation of vulnerable species like the Eastern Chimpanzee and the African Elephant,“ It added.

The letter added at the time of writing, five major multinational (re)insurers, Zurich, AXA, Swiss Re, SCOR and Hannover Re have stated that they will not insure the project. Fifteen major commercial banks from Europe, Japan, Australia and South Africa have publicly stated that they will not participate in the $3 billion project loan needed for the pipeline to reach financial close. The UK export credit agency, UKEF, and the African Development Bank have similarly refused support for the project.

“The #StopEACOP Campaign calls upon Lloyd’s to advise its members against participation in (re)insurance coverage for the East African Crude Oil Pipeline and associated oil projects. We urge Lloyd’s members to instead support sustainable and rights-respecting alternative development opportunities in the region,“ it said.