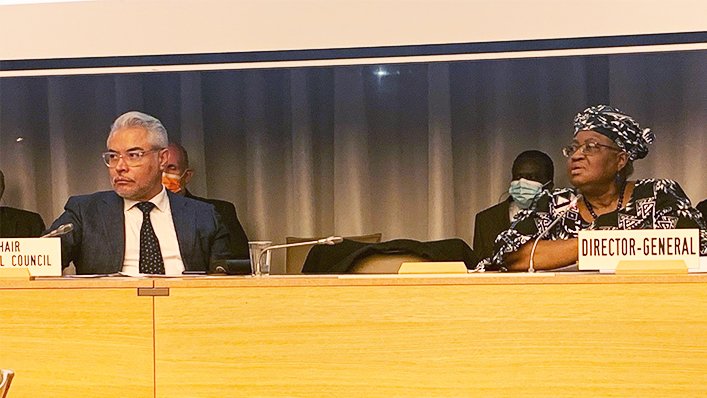 The World Trade Organisation (WTO) has cancelled this week’s Ministerial Conference after the emergence of the Omicron COVID variant.

The event was due to start tomorrow in Geneva but restrictions on travel in countries across Europe and the world would make it Impossible for many for the delegates from 164 nations to attend in person.

The organisation’s General Council chair Ambassador Dacio Castillo (above left) from Honduras said: “Given these unfortunate developments and the uncertainty that they cause, we see no alternative but to propose to postpone the Ministerial Conference and reconvene it as soon as possible when conditions allow. I trust that you will fully appreciate the seriousness of the situation.”

Director-general Ngozi Okonjo-Iweala (above right) said the travel constraints meant that many ministers and senior delegates could not have participated in face-to-face negotiations at the conference. This would render participation on an equal basis impossible, she said.

She pointed out that many delegations have long maintained that meeting virtually does not offer the kind of interaction necessary for holding complex negotiations on politically sensitive issues.

“This has not been an easy recommendation to make … But as director-general, my priority is the health and safety of all MC12 participants – ministers, delegates and civil society. It is better to err on the side of caution,” she said, adding that the postponement would continue to keep the WTO in line with Swiss regulations.

WTO members were unanimous in their support of the recommendations from the Director-General and the General Council Chair, and they pledged to continue working to narrow their differences on key topics like the WTO’s response to the pandemic and the negotiations to draft rules slashing harmful fisheries subsidies.

The Director-General and Ambassador Castillo urged delegations to maintain the negotiating momentum that had been established in recent weeks.

“This does not mean that negotiations should stop, said Castillo. “On the contrary, delegations in Geneva should be fully empowered to close as many gaps as possible. This new variant reminds us once again of the urgency of the work we are charged with.”

It is the second time that the pandemic has forced a postponement of the 12th Ministerial Conference. The meeting was originally due to take place in June 2020 in Nur-Sultan, Kazakhstan.