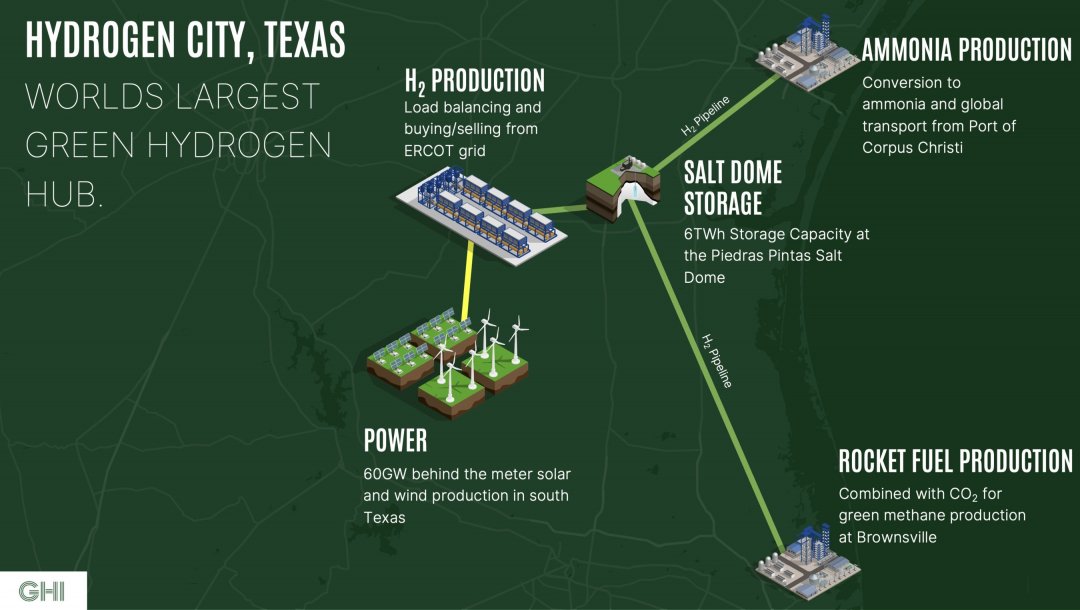 US start-up Green Hydrogen International  (GHI) has unveiled a 60GW renewable hydrogen project, coined ‘Hydrogen City’, which will be built in Texas.

The new facility, to be powered by wind and solar, will have its own salt cavern for storage and plans to produce clean rocket fuel for Elon Musk’s SpaceX.

The planned plant in Duval County would produce more than 2.5 million tonnes of green hydrogen a year upon completion.

It will be centred around a hydrogen storage facility in the Piedras Pintas Salt Dome, with pipelines to the port cities of Corpus Christi and Brownsville on the Mexico border.

GHI said it is exploring several possible end-uses for its hydrogen, including: sustainable rocket fuel; clean aviation fuel; green ammonia for fertiliser production, or export to Asia; or as a substitute for natural gas in power plants.

“The company is looking at combining hydrogen with CO2 at the Port of Brownsville to create a green methane rocket fuel for launch operations in South Texas,” GHI said in a statement.

SpaceX is currently developing a new type of rocket engine that would use cryogenic liquid methane and liquid oxygen, rather than the kerosene-based fuel the company has used to date.

The first 2GW phase of Hydrogen City is due to begin operations in 2026.

“We see Hydrogen City becoming one of the largest  hydrogen production centers in the world, supplying many different customers with 100% clean H2 fuel,” said Maxwell.

GHI board member Andy Steinhubl added: “Hydrogen City is a project perfectly positioned near low-cost renewable resources, plenty of available land, salt domes, and proximity to the large energy port of Corpus Christi. It will be a world cost leader and position GHI to take advantage of the growing demand for green hydrogen.”

The largest single-site green hydrogen project announced until now has been the Western Green Energy Hub in Western Australia, which would be powered by 50GW of wind and solar.