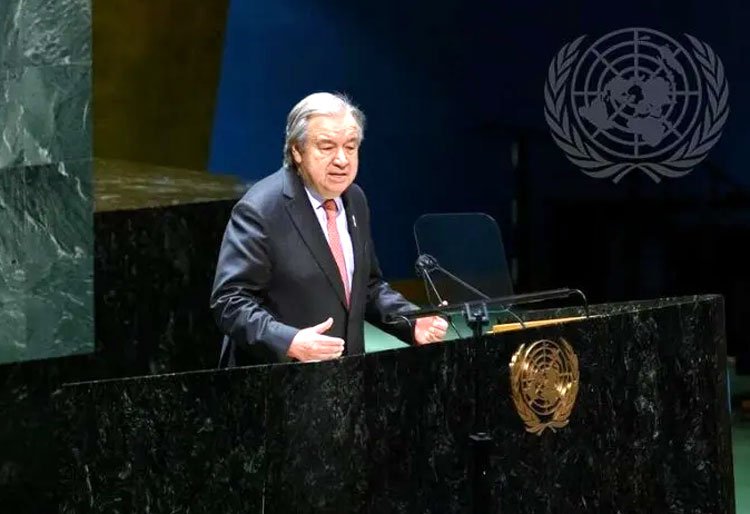 World warned to wake up to need for urgent climate action

United Nations secretary general António Guterres has called on the G20 to lead the world’s efforts to transition to net zero warning that “we are sleepwalking to climate catastrophe.”

He made his call during the latest meeting of the Intergovernmental Panel on Climate Change (IPCC) which opened this week to consider its latest report on the state of the world’s efforts to halt global warming.

Some of the progress made at COP 26 last year but pointing to “the enormous emissions gap” conceded that “the main problem was not solved – it was not even properly addressed.”

Guterres said the war in Ukraine had impacted the world’s efforts to drive change as concerns over oil and gas supplies and rising prices had many nations’ rethinking their strategies in an effort to solve a short term problem.

“Keeping 1.5 alive requires a 45 per cent reduction in global emissions by 2030 and carbon neutrality by mid-century”, he said, adding how Russia’s invasion of Ukraine “threatened to become a huge setback” for the concerted effort to speed up climate action.

This week he warned the war is a threat to future sustainability.

“The war is also aggravating existing economic and social vulnerabilities — well beyond the region,” he said.  “We see skyrocketing prices for food, fuel and other essentials.  Supply chains are being disrupted.  Transportation costs are going through the roof.

“Meanwhile, the war also shows how the global addiction to fossil fuels is placing energy security, climate action and the entire global economy at the mercy of geopolitics.  This further exacerbates the climate crisis, which is already wreaking havoc around the world.”

He added: “We know exactly what to do to avert a global climate catastrophe.  As science tells us, we must reduce emissions by 45 per cent this decade and achieve net‑zero emissions by 2050.  We must invest 50 per cent of climate finance in adaptation and resilience to protect vulnerable communities from being wiped off the map.  And we must ensure that climate finance commitments to developing countries — who bear the brunt of the crisis — are finally met.

“Parliaments and legislators are essential to achieving these goals.  Now is the time to turbocharge ambitious climate policies and transition to renewable energy and green jobs.  Together, let us do everything in our power to build a more sustainable, resilient and peaceful world.”

“Countries could become so consumed by the immediate fossil fuel supply gap that they neglect or knee-cap policies to cut fossil fuel use,” Guterres insisted. “This is madness.”

As fossil fuels reliance continues to put the global economy and energy security at the mercy of geopolitical shocks and crises, “the timeline to cut emissions by 45 per cent is extremely tight.”

With the planet warming by as much as 1.2 degrees, and where climate disasters have forced 30 million to flee their homes, Mr. Guterres warned: “We are sleepwalking to climate catastrophe.”

“In our globally connected world, no country and no corporation, can insulate itself from these levels of chaos,” he said, warning if we do not want to “kiss 1.5 goodbye…we need to go to the source – the G20”.

Guterres added developed countries must not put the onus on emerging economies to accelerate their transition nor must emerging economies responding by saying, “you exported carbon-intensive heavy industrial activities to us in return for cheaper goods”.

“We can’t point fingers while the planet burns,” he warned.