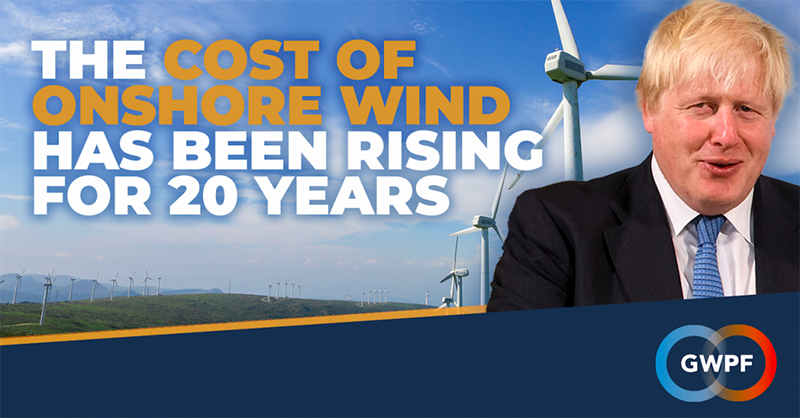 Wind power costs are on the rise despite political denials

New analysis from the Global Warming Policy Foundation reveals that the cost of onshore wind power has risen by 30% since the introduction of the Renewables Obligation, 20 years ago.

The analysis, based on audited financial accounts and official generation data, throws into question claims from the wind industry that wind is becoming ever more competitive.

The findings are also another major blow to the UK government’s Net Zero policy, which will fail without cheap and abundant renewable electricity.

“Onshore wind is 60% dearer than the figure in the Government’s plans for Net Zero, making it a nonsense of claims that it is the cheapest form of electricity generation. We are looking at high costs into the economy”

The steady rise in onshore costs is thought to be due to windfarms being sited at progressively worse locations. In other words, the best sites are now all taken.

Earlier analyses have found that offshore wind remains extraordinarily expensive, with at best only a small reduction in recent years.

In the study author Andrew Montford, deputy director of the Global Warming Policy Foundation said the figures simply do not add up.

“Real-world data – from audited accounts and official power generation figures – show that the levelised cost of major onshore windfarms in the UK is rising rather than falling,” he said. “At over £80/MWh, it is perhaps twice the cost of electricity from gas turbines running flat out, even before considering the considerable extra burden of dealing with intermittency.

“In the midst of an economic crisis of historic magnitude, it is surprising that anyone would seek to expand its use. Yet that is what politicians of all stripes seek to do.”

He added: “As this paper shows, their claims about onshore wind are, if anything, even less plausible. That steady increases in costs should, over a year or two, suddenly change into precipitous falls would be extraordinary if it came to pass. But extraordinary claims demand extraordinary evidencel as yet we only have lines on graphs. In order for the advocates’ claims to hold water, they need to explain which windfarms they believe are operating at the low cost levels they say are now the norm. My plea to the advocates is to make public the data to support their claims.”