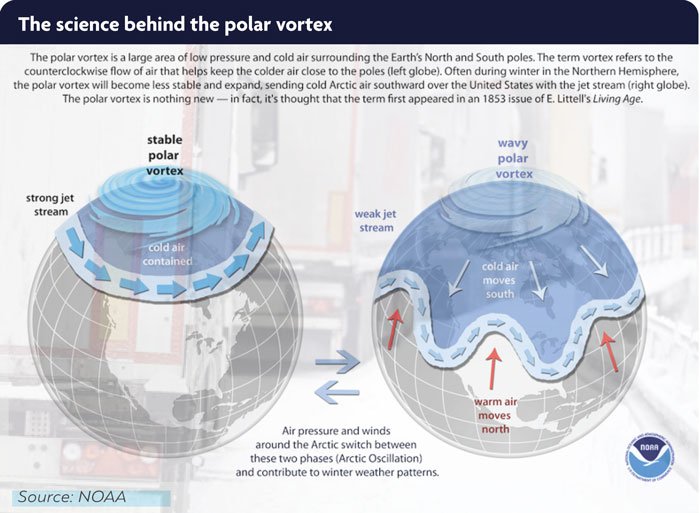 The “mixed” weather patterns seen across the world in February may be indicative of a new climate normal.

A new climate report from Copernicus Climate Change Service implemented by the European Centre for Medium Range Weather Forecasts (ECMWF) found northern hemisphere winter and southern hemisphere summer exhibited very mixed climate patterns, with below average temperatures in parts of the world. However, the gradual introduction of updated “climate norms” gives rise to the question as to what is an average temperature?

February temperature was much below the 1991-2020 average over much of the Russian Federation and North America, but much above average over parts of the Arctic and in a band stretching eastward from north-western Africa and southern Europe to China.

February 2021 sea ice extent was below average in both polar regions, though not exceptionally so. In the Arctic, sea ice was most below average along northeastern Canada, with a mix along Eurasia, according to Copernicus Climate Change Service.

The report said February’s weather was influenced by a large scale and interconnected atmospheric circulation patterns and a recent meteorological event called a Sudden Stratospheric Warming Event high up in the Stratosphere, about 30 km over the North Pole.

The stratospheric warming event led to a weakening of the polar vortex, which is an area of low pressure and cold air surrounding the Earth’s North and South poles, with swirling westerly jet stream winds circulating around them. Typically, those winds are strong enough to keep the coldest air in the Arctic during the winter. The weakening allowed the cold air to spill out into the mid-latitudes, including the USA, and for the warmer air to enter the Arctic.

Repeated disruptions of the polar vortex resulted in a strongly negative Arctic oscillation since early December 2020. This translated into a warm Arctic, cold continent pattern, with cold waves in Europe, as well as episodes of heavy precipitation particularly over southern Europe and the Mediterranean rim countries, and Atlantic storms.

The World Meteorological Organisation (WMO) said the fact that February was a relatively cold month does not negate the long-term warming trend from climate change.

In general, cold waves are becoming more infrequent as a result of climate change and there has been a decline in new cold temperature records as a result of global warming.  But frigid temperatures and snow will continue to be part of our typical weather patterns in the northern hemisphere winter.

In its Fifth Assessment Report, the Intergovernmental Panel on Climate Change said it is “virtually certain that there will be more frequent hot and fewer cold temperature extremes over most land areas on daily and seasonal timescales as global mean temperatures increase. It is very likely that heat waves will occur with a higher frequency and duration. Occasional cold winter extremes will continue to occur.”

Globally, February 2021 was close to the 1991-2020 average, according to the Copernicus Climate Change Service, which has recently switched to a new 1991-2020 baseline to calculate climatological averages. National Meteorological and Hydrological Services in Europe and some other parts of the world have also introduced the update. Others are expected to follow.

Human-induced global warming and natural variations from year to year, and decade to decade, shape our climate. Therefore climatologists, use standard reference periods, as defined by the WMO, to create average “climate normal” that represent what can be considered a typical climate for that period.

Until the end of 2020, the most current and widely used standard reference period for calculating climate normals was the 30-year period 1981-2010.  WMO’s recent Services Commission meeting recommended that the new 30-year baseline, 1991-2020, should be adopted globally and pledged support to Members to help them update their figures.

“It is necessary to update the climate normals to support decision-makers in climate sensitive sectors such as agriculture, health, energy, infrastructure and transportation,” explained the WMO. “However, for the purposes of historical comparison and climate change monitoring, WMO still recommends the continuation of the 1961-1990 period for the computation and tracking global climate anomalies relative to a fixed and common reference period.”

The World Meteorological Organisation (WMO) said the fact that February was a relatively cold month does not negate the long-term warming trend from climate change.

Emerging risk threat has to be addressed
Scroll to top