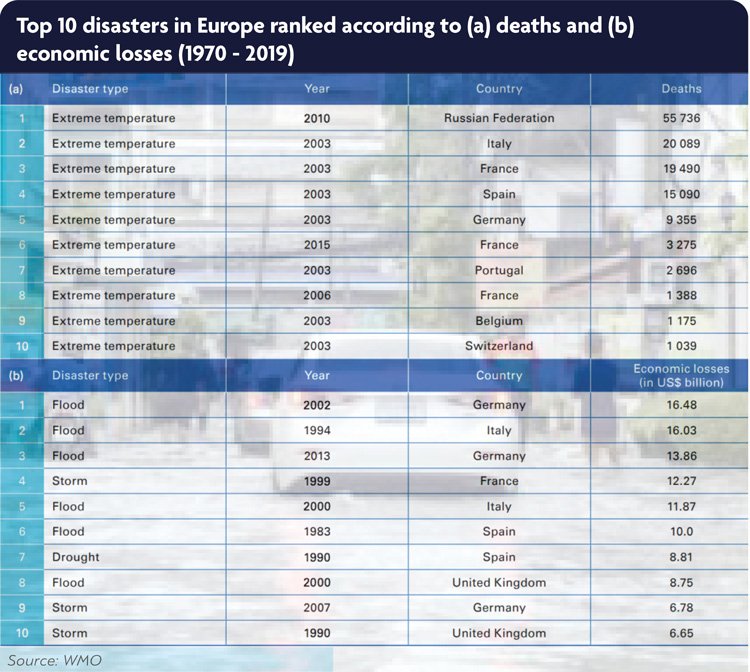 The World Meteorological Organization (WMO) has warned that water-related hazards remain the dominant cause of disasters in terms of both the human and economic toll over the past 50 years.

In detailed analysis the WMO has warned climate change is exacerbating the issue as more moisture is retained in the atmosphere.

With regard to economic losses, the top 10 events include storms (US$ 521 billion) and floods ($115 billion), according to an excerpt from the Atlas, which will be published in September.

Floods and storms inflicted the largest economic losses in the past 50 years in Europe, at a cost of $377.5 billion. The 2002 flood in Germany caused $16.48 billion in losses and was the costliest event in Europe between 1970 and 2019. However, heatwaves had the highest human toll.

The data showed that over the 50-year period, weather, climate and water hazards accounted for 50% of all disasters (including technological hazards), 45% of all reported deaths and 74% of all reported economic losses at global level.

“Weather, climate and water-related hazards are increasing in frequency and intensity as a result of climate change. The human and economic toll was highlighted with tragic effect by the torrential rainfall and devastating flooding and loss of life in central Europe and China in the past week, said WMO Secretary-General Prof. Petteri Taalas.

“But, increasingly, heavy rainfall episodes also bear the footprint of climate change. As the atmosphere gets warmer it holds more moisture which means it will rain more during storms, increasing the risk of floods,” he added. “No country – developed or developing – is immune. Climate change is here and now. It is imperative to invest more in climate change adaptation, and one way of doing this is to strengthen multi-hazard early warning systems.”

“Water is the primary vehicle through which we feel the impacts of climate change. To effectively address both water and climate challenges, we must bring climate change and water to the same table – into the same conversation: Tackling them as one. This is why WMO is spearheading a new Water and Climate Coalition, a community of multi-sectoral actors, guided by high-level leadership and focused on integrated water and climate action,” said Taalas.

The German national meteorological service, DWD, said up to two months’ worth of rainfall fell in 2 days (14 and 15 July) on soils that were already near saturation in the most affected regions of Germany, Belgium, Netherlands, and Luxembourg. Switzerland and Austria were also hit by severe flooding.

Some parts of the central Chinese province of Henan received more accumulated rainfall between 17-21 July than the annual average. The national meteorological observation station in Zhengzhou reached 720 mm – compared to its annual average of 641 mm.

Zhengzhou, the capital of Henan, received the equivalent of half its annual rainfall in the space of six hours. The 6-hour rainfall was 382mm and from 16:00-17:00 on 20 July, the 1-hour rainfall in Zhengzhou exceeded 200mm.

More than 600 stations recorded precipitation over 250mm. The maximum precipitation was 728mm. The Henan Meteorological Service initiated the highest level emergency response to deal with the flooding.

“An increasing number of studies are finding human influence on extreme rainfall events,” said the WMO. “One example is the extreme rainfall in eastern China in June and July 2016, where found that human influence significantly increased the probability of the event, with the signal less clear in a third peer review study published in the annual supplement to the Bulletin of the American Meteorological Society.”

The data showed that over the 50-year period, weather, climate and water hazards accounted for 50% of all disasters (including technological hazards), 45% of all reported deaths and 74% of all reported economic losses at global level.