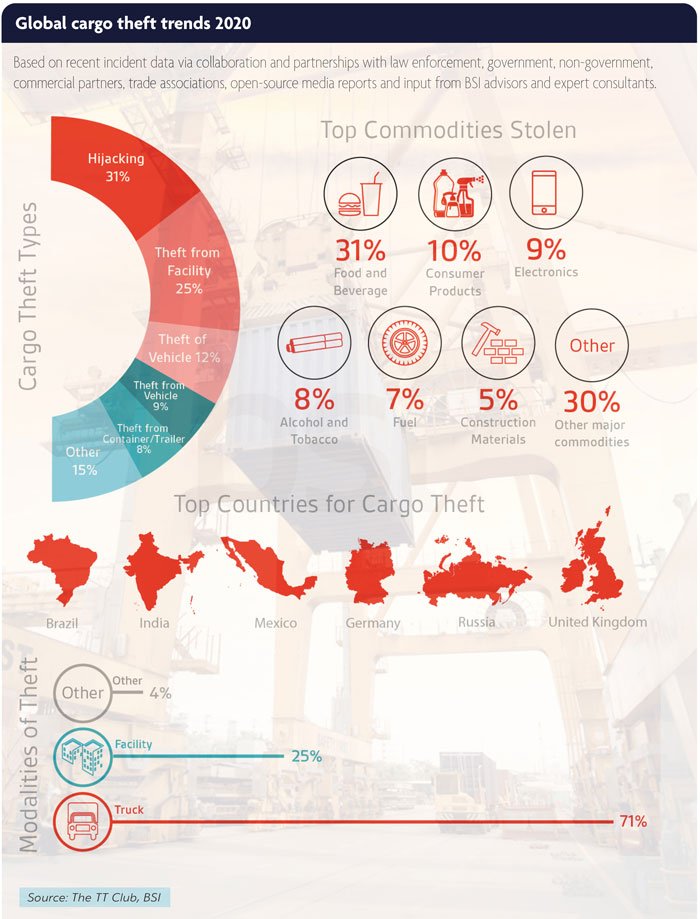 Fears the world’s vaccine supplies have become the number one target for cargo thieves have risen as the impact of the pandemic is highlighted in global theft figures.

Insurer the TT Club and supply chain intelligence specialist BSI have issued its annual cargo theft report which found with the COVID crisis PPE, face masks and anti-bacteria gel were new high value targets. With the global rollout of the COVID vaccines there are concerns that they will become a target for cargo thieves.

The report found there had been a relative shift in the location of thefts, with in-transit incidents and those involving vehicles showing a decline, though remaining the most dominant threat, and theft from storage facilities increasing.

The trend reflected the disruption to supply chains brought about by radical changes to consumer buying patterns as a consequence of the pandemic.

TT Club’s Managing Director, Loss Prevention, Mike Yarwood said: “The effects throughout 2020 of the COVID crisis threatened supply chain security, continuity and resilience. Not only did newly created high-value commodities such as PPE become targets for theft but bottle-necks in the logistics infrastructure at ports and warehouses brought increased potential risks. Temporary overflow storage facilities added to the dangers in loosening the grip of existing security systems.”

The club warned that although specific incidents have not yet occurred, unless distribution plans for vaccines are perfectly executed within the expectations of any given population, challenges will arise in protecting the single most valuable cargo of all in the coming months.

In Europe, the stockpiling of goods meant inventories came under particular threat with 48% of 2020 reported thefts coming from warehouses and production facilities. This was in contrast with 2019 when only 18% came at such locations. On the other hand, 54% of incidents occurred in rest areas and parking sites in 2019 — the 2020 figure was 19%.

In Asia, the countries with the highest risk remain India, Indonesia, China and Bangladesh. The proportion of storage-based risk remains around 50% in Asia as a whole but in Southeast Asia the in-transit risk indicates the prevalence of bribery and corruption with a high percentage of thefts being facilitated by employees and customs or other officials.

North America continues to see theft coming almost exclusively in-transit via hijackings or directly from a parked vehicle. The risk of social unrest, particularly in Mexico, arguably impacted the risk of cargo loss through most of last year. Significant disruption to the Mexican rail freight industry, with protesters setting up blockades on train tracks, created a backup of cargo across the country. This disruption led to estimated losses of close to $4.4billion

“A key driver of the high rates of cargo theft here remains the presence of major illegal drug smuggling gangs that need to fund their trafficking efforts,” added reports. “The dominant risks were from hijacking and theft from or of vehicles.  These theft types accounted for 78% of the total losses reported. The extreme rate of cargo theft, however, did drop for the first time in several years, as continued efforts by police and industry contributed to a slight decline in incidents in 2020.”

The TT Club said it feared in the coming year disruption and the uneven resumption of international trade resulting from the spread of COVID will continue with imbalances in shipping container distribution that are likely to impact maritime, and through a knock-on effect air cargo capacity throughout 2021. The added vulnerability of cargo will therefore continue.

“The key to mitigating threats in 2021 is to stay ahead of the risk,” added the report.

0
SHARE:
IRM joins forces with Imperial College and the Grantham Institute on climate...