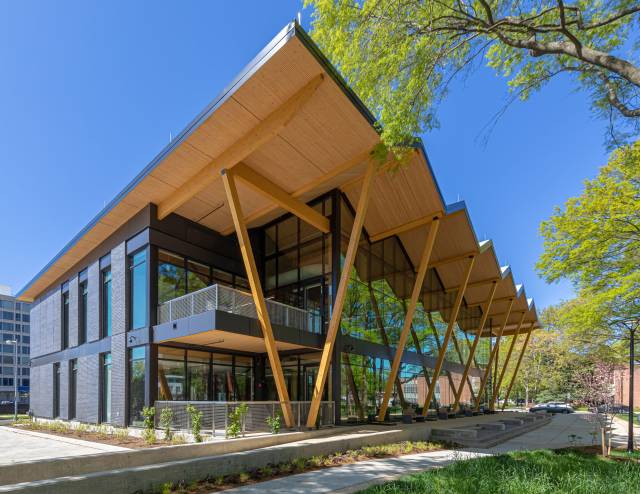 Researchers have developed a new tool which will allow future urban planners to understand how they can design low carbon and sustainable cities.

The team from Princeton University has designed the system for city planners which will aid them design a portfolio of actions that encompasses compact development, smart electric mobility, electric heating systems, mass timber construction, urban reforestation, and technologies that allow resources to circulate efficiently through the food, waste and energy sectors.

“In cities, environment health and human wellbeing intersect,” said Anu Ramaswami, who developed the tool and is Princeton University’s Sanjay Swani ’87 professor of India studies and a professor in the Department of Civil and Environmental Engineering (CEE), the Princeton Institute for International and Regional Studies, and the High Meadows Environmental Institute — as well as the director of the M. S. Chadha Centre for Global India.

“About 55% of the world’s population lives in cities, and more than 90% of the world’s gross domestic product is generated in cities,” she said. “If you can figure out zero-carbon strategies at the city scale for different types of cities across the globe, there’s potential to solve global challenges with local benefits.”

At a UN climate summit last fall, 1,049 cities with a collective 722 million occupants joined the “Cities Race to Zero” campaign, committing to halve emissions by 2030 and reach net-zero by 2050 or earlier, which was the largest and most aggressive set of commitments by any group at the summit.

Ramaswami said she and the team are working to help these cities reach carbon “net-zero,” sometimes called “carbon neutrality,” balancing the amount of carbon dioxide emitted with the amount absorbed from the atmosphere. Cities that emit no more greenhouse gases than are permanently removed are essential to averting the worst consequences of climate change, say experts.

To further those efforts the team developed the Zero Emissions Calculator for Communities (ZECC), a carbon dioxide emissions calculator. They then took it a step farther by partnering with the Twin Cities Metropolitan Council (Met Council) in Minnesota, incorporating high-resolution local data to create a “Greenhouse Gas Scenario Planning Tool” for every city, town and rural community in the Minneapolis-St. Paul region.

“This is the first project to quantify each community’s energy use projections, based on granular data on each town’s own building stock, its own energy intensity and its own employment characteristics,” said Ramaswami.

“The tool provides a nice intersection of sustainability and equity,” said Eric Wojchik, a planning analyst with the Met Council. “Obviously, focusing on mitigating emissions is important, but we also need to think about how we do that in a just and equitable fashion.”

So many decisions have a carbon impact, Ramaswami said. Take building materials. Concrete, the default option in many government buildings for decades, has a colossal carbon footprint — at least 8% of global carbon dioxide emissions caused by humans come from the cement industry.

But a newly popular material, a wood-based product called cross-laminated timber, or mass timber, can turn buildings into carbon sinks. “Mass timber buildings can be a phenomenal way of literally storing the forest in your building,” said Ramaswami.

“Many cities are finding that is very challenging to get to net-zero by 2040, but they can get close, maybe 80% along the way,” she added.

In the Twin Cities case studies, she found designing buildings with mass timber, for instance, can close around 10% of the carbon gap. Building more multi-story buildings can result in compact urban design that maximizes travel efficiency to get another 20%, creates space for urban reforestation, and makes it easier to implement novel district energy solutions.

“Twenty percent is enormous!” said Ramaswami. “Build it of mass timber, and the benefit is even greater. That’s exactly what we’re trying to show different cities, that you can play with these different levers; they all interact with each other.”

A big urban reforestation campaign, or converting food waste to energy, might get you another three to five percent. “It’s not huge, but to get to net-zero, five percent is nothing to sneeze at. It’s very difficult to get that last bit, to go to zero,” she said. She also cautioned that urban forests must be long-lived to truly function as a carbon sink, and lifecycle assessments are needed to affirm the carbon benefits of waste-to-energy technologies.