This summer of record temperatures has seen a number of significant wildfires across wide swathes of southern and eastern Europe, as well as on the west coast of the United States, as climate change continues to bite.

Only this week, for example, a wildfire in California grew to the largest the state has seen yet this year, as firefighting crews braced for thunderstorms and hot, windy conditions.

The McKinney fire was burning out of control in northern California’s Klamath national forest, near the Oregon border, with expected thunderstorms a big concern, said US Forest Service spokeswoman Adrienne Freeman.

“The fuel beds are so dry and they can just erupt from that lightning,” Freeman said. “These thunder cells come with gusty erratic winds that can blow fire in every direction.”

The blaze exploded in size to reach more than 80 sq miles (207 sq km) by Sunday evening (31 July), just two days after erupting in a largely unpopulated area of Siskiyou county. At least 2,000 people were ordered to evacuate. The cause of the fire remains under

However, while the severity and frequency of such wildfire activity is clearly of great concern, we should also be worried about the spread of wildfires to more northern regions, as new analysis demonstrates.

During 2019, 2020 and 2021 the Copernicus Atmosphere Monitoring Service (CAMS) tracked increases in the number of fires and related emissions estimates in the far northeast of Russia, including in the Arctic Circle.

According to the analysis, unusually intense wildfires, compared to other years in the CAMS Global Fire Assimilation System (GFAS) dataset (2003-present), were partly linked to higher-than-average temperatures and dry conditions in the region.

Wildfire activity around the world follows seasonal patterns, with the Northern Hemisphere typically seeing activity between May and October, with peaks in July and August, coinciding with the hottest and driest months of the year. However, surface air temperatures in the Arctic are increasing much faster than the global average, and this might be contributing to increased flammability and potentially more fire activity, according to CAMS.

The study examines 2022 fire activity in the higher latitudes of the Northern Hemisphere from late spring to early summer, particularly in Siberia and Alaska, where there have already been some episodes of smoke being transported vast distances towards the Arctic Ocean.

While the spring months were unremarkable, in early June, a growing number of fires developed in Alaska, including within the Arctic Circle.

Fire radiative power (FRP), a measure of heat output, was particularly high during the start of the month; well above the 2003-2021 mean of the GFAS dataset. Large quantities of smoke from these fires have already been carried long distances, with some transport across the Beaufort Sea towards the Arctic Ocean.

Most of this transport appears to have been above the surface, but if smoke plumes lead to black carbon particles settling on ice, the darkening of the surface can cause the ice to absorb more heat, with an associated impact on global warming. Fire emission estimates for the month as a whole were the third highest in the GFAS dataset, after 2004 and 2015.

Meanwhile, during the spring, in western and central areas of Russia, including the Ural and Siberian Federal Districts, FRP was unusually high in mid-April and early May. Total estimated emission levels were the fifth highest in the GFAS dataset, although about half of the levels seen in the top three years of 2015, 2003 and 2008.

Further east in Russia, wildfires typically occur in the summer rather than spring months. In the Sakha Republic and Chukotka Autonomous Okrug, areas which have seen unusually high activity in the last three years, FRP was at or below typical daily values throughout most of June. The number of fires and levels of estimated emissions followed the typical seasonal increase towards the end of the month and into July. CAMS will monitor these high latitude fires closely as the summer progresses. Daily Fire Radiative Power for 2022 (red) compared to the 2003-2021 mean (grey) for the Sakha Republic (left) and Chukotka Autonomous Okrug (right).​​​​​

Mark Parrington, senior scientist at CAMS, commented: “In recent summers we have observed large-scale and persistent wildfires around the Northern Hemisphere, and we are closely monitoring the fires which have developed through the spring and early summer.”

“This year’s Northern Hemisphere fire activity hasn’t been particularly unusual, but we know that increased flammability of vegetation has increased the risk of large wildfires. The actual occurrence and scales, however, are difficult to predict. For this reason, and to provide timely information to users, we continue to monitor the fire activity in these regions and worldwide, as well as fire intensity and the resulting smoke they emit.”

CAMS continuously monitors global fires and estimates their emissions with its Global Fire Assimilation System (GFAS), using data from in situ measurements and satellite-borne instruments. The estimated emissions are combined with the ECMWF integrated forecast system, which models the transport and chemistry of atmospheric pollutants, to predict how the global air quality will be affected up to five days ahead.

Wildfire activity around the world follows seasonal patterns, with the Northern Hemisphere typically seeing activity between May and October, with peaks in July and August, coinciding with the hottest and driest months of the year. However, surface air temperatures in the Arctic are increasing much faster than the global average, and this might be contributing to increased flammability and potentially more fire activity, according to CAMS. 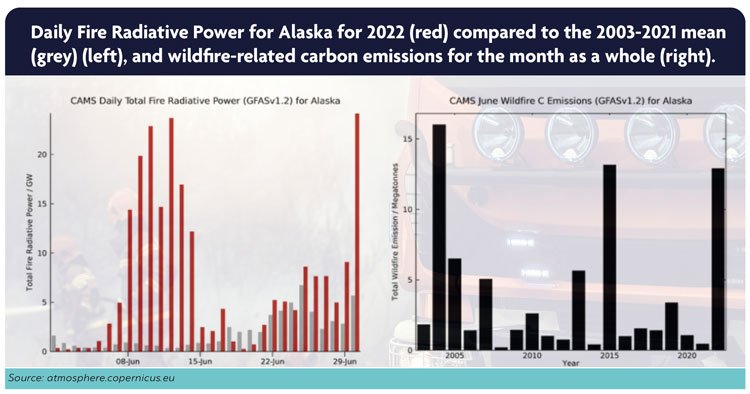 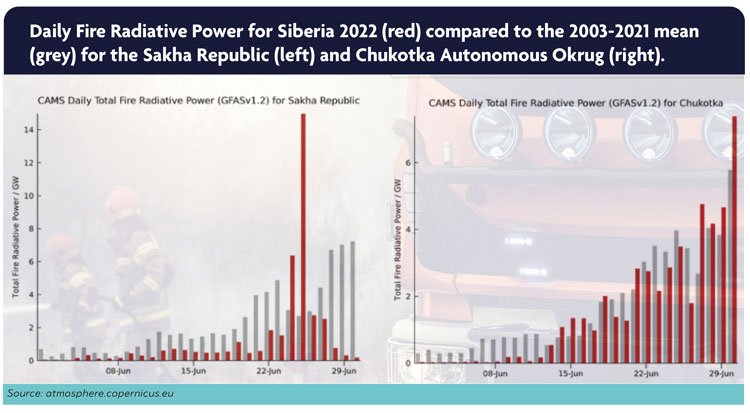