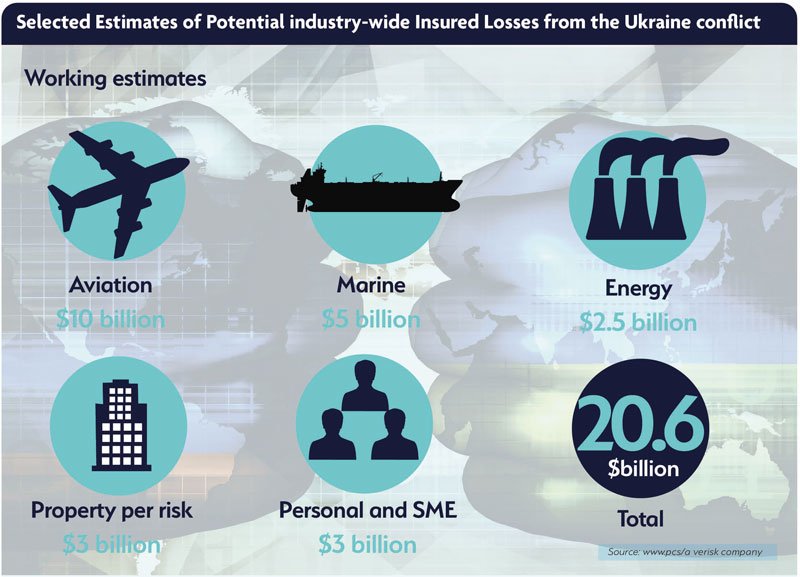 In this wide-ranging analysis, PCS believes that aggregate industry-wide insured losses as a result of the conflict in Ukraine could exceed approximately $20 billion.

Indeed, according to the catastrophe loss specialist, the conflict in Ukraine has the potential to become the largest industry-wide insured loss, across all classes of business, in history, even exceeding that of the terror attacks of 11 September 2001.

It suggests that the loss is likely to be spread across several markets:

PCS says that the conflict in Ukraine has led to intense focus on the global aviation (re)insurance market, specifically the potential insured losses from policies associated with the aircraft leasing market. Publicly reported estimates have tended to range from $5-10 billion, with even the low end potentially making this the largest aviation insured loss event in the market’s history. However, it adds that the ultimate loss to the market will be far more nuanced.

The designation of the Black Sea and Sea of Azov as war areas for marine by the Joint War Committee has led some marine market professionals to expect relatively low insured losses from the conflict, even with a reported six vessels affected so far, according to PCS, though there is still the possibility for insured losses to accumulate to multiple billions of dollars.

Blocking and trapping losses, for example, take time to materialise, but if the time conditions are met, PCS clients have indicated that the inability of vessels to move freely and safely in the region makes trapping and blocking a real concern. Waiting periods tend

to range from six months to a year, which leaves room for some amount of uncertainty. PCS believes that such losses could go as high as $1 billion.

According to PCS market sources, most insured energy losses are expected to come from the onshore sector, with windfarms alone likely sustaining as much as $850 million in industry-wide insured losses. Additionally, there are several nuclear facilities that have sustained damage or other disruption that could result in insured losses in the future, including Zaporizhzhia and potentially Chernobyl, according to public reports.

Property per risk losses could take the longest to accumulate, according to PCS, given that a large number of companies could be affected, limits could be high, and business interruption could contribute significantly to any industry-wide insured loss total for this class of business.

This category is not expected to comprise a significant portion of the industry loss.

PCS adds that expectations about cyber activity have varied since the earliest days of the conflict. Some expected a much greater role for cyber, while others believe that impact from attempted cyber operations was at least dulled by preparations made in 2021. 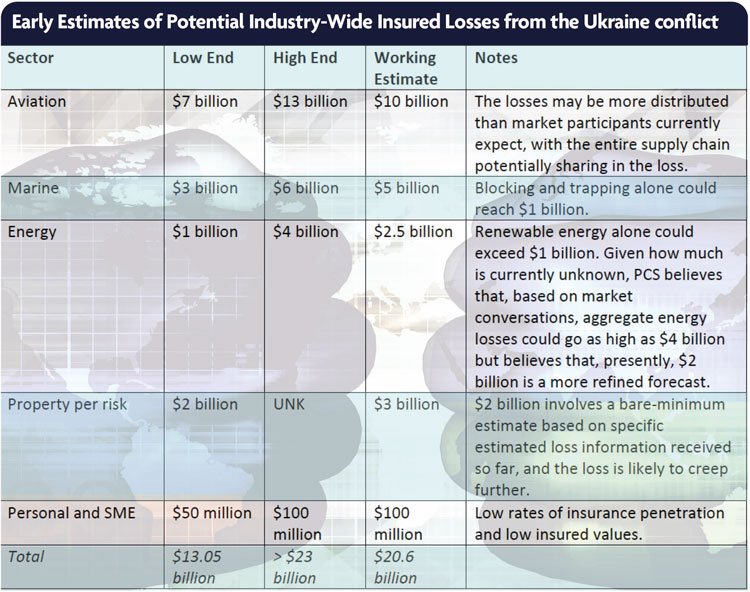 According to the catastrophe loss specialist, the conflict in Ukraine has the potential to become the largest industry-wide insured loss, across all classes of business, in history, even exceeding that of the terror attacks of 11 September 2001.