Thunderstorms cause extensive damage in Southern US

Extensive damage has been caused by severe thunderstorm activity this week which has affected portions of the Southern Plains through the Lower Mississippi Valley, according to Guy Carpenter.

In particular, significant tornado activity has been reported by the US Storm Prediction Center (SPC) in portions of Texas, Louisiana and Mississippi. The severe weather threat has continued although with diminished severity for portions of the Southeast, Mid-Atlantic and Lower Great Lakes.

Guy Carpenter said that an early assessment suggests that extensive damage is apparent in Orleans Parish, LA including the New Orleans Metro area as well as Hinds County and Holmes County, MS.

“Damage survey efforts are scheduled and ongoing to assess affected areas. It will take time for National Weather Service survey teams to assess affected sites and reconcile damage against structures that are older or are not built to modern codes,” the broker noted.

It added that severe thunderstorm activity, and tornado activity in particular, tends to amplify during the latter period of March in the Southern Plains and Deep South. The threat comes as warm, moist air from the Gulf of Mexico becomes available, contrasting with cold, dry air from higher latitudes to produce optimal environments for severe weather.

Asking what might be next for the system, Guy Carpenter suggested that isolated tornadoes and scattered hail were possible in the Upper Ohio River Valley region.

In the Midwest and Southeast, daytime heating could fuel the existing thunderstorm activity, it said, creating the potential for damaging wind and hail, especially along coastal Georgia and the Carolinas. 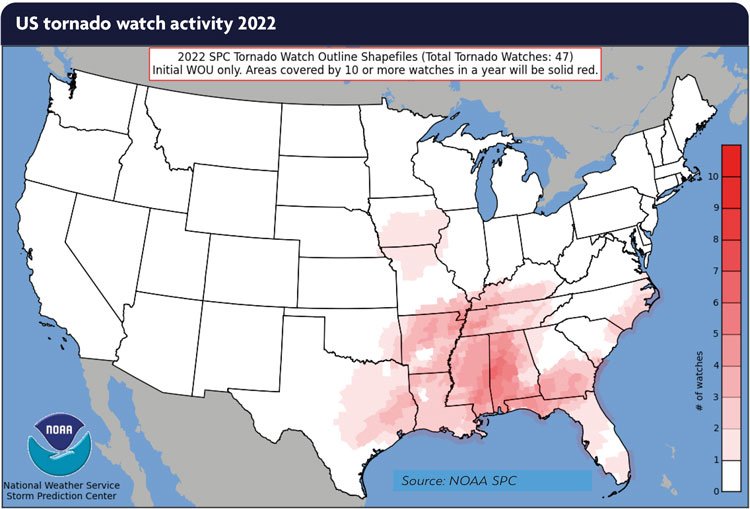