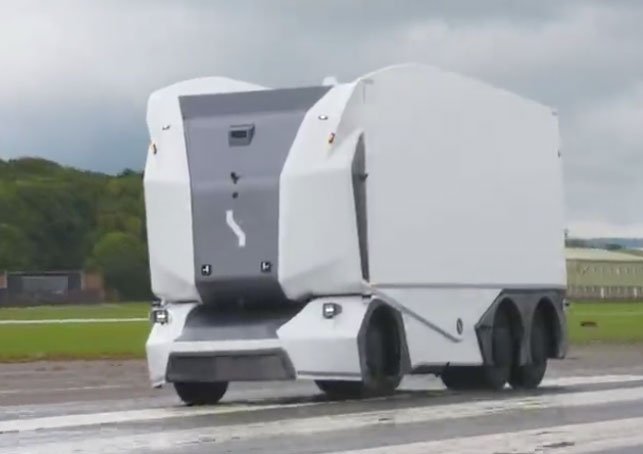 A Swedish firm is pioneering the development of driverless trucks in a move which it hopes could revolutionise cargo transportation by road.

The company is Einride, a Swedish firm founded in 2016 by Robert Falck, an engineer who used to work for Volvo. This month it has tested the truck, known as the Pod, on the Dunsfold track in South East England.

The circuit is best known to motoring enthusiasts as that used by the BBC show ‘Top Gear’ as a test drive track.

According to Einride, the truck achieved a top speed of 80 kph on the circuit, showcasing the ability of this vehicle to be operated at the heavy goods vehicle (HGV) speed limit for the European Union.

“Operating an autonomous and electric transport vehicle at this type of speed and in these conditions is a major achievement, and one that shows our technology is prepared to meet a wide range of typical freight operating conditions,” said CEO Falck.

“Our team has been dedicated to making this possible for months, and we are proud of everyone involved for their hard work.”

“This is a major milestone and shows how far this technology has evolved through the diligent work of the Einride team,” added Pär Degerman, CTO of Einride. “This showcase gives us the confidence to start to expand and deploy this technology in a new context.”

The prospect of driverless trucks is not just a pipe dream, with Degerman confidently saying the firm expects to deliver to customers by 2023.

The company can avoid the complex legal and regulatory issues currently concerning the roll-out of autonomous vehicles on main roads because the first version of the Pod is instead designed to operate on designated routes within the confines of enclosed, private areas such as ports and industrial parks.

“With the launch of our next-generation Pod, we set our sights higher than ever to deliver Autonomous Electric Transport (AET) to the world sooner than many believed to be possible. This record-setting demonstration is our way of showing the world that we are ready to scale this technology, commercially and in terms of capability,” said Falck.

The Pod navigates and avoids obstacles using a combination of sensors which include satellite-positioning, cameras, radar and lidar – an optical-frequency analogue of radar that employs reflected laser light to build up a three-dimensional image of a vehicle’s surroundings.

Its power comes from lithium-ion batteries, and these are claimed can provide a range of up to 180km between charges.