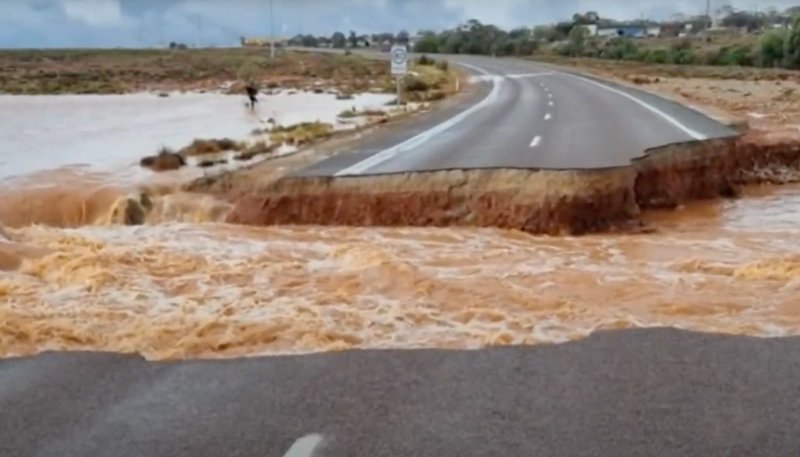 Widespread damage was caused by about 50 millimetres of rain falling in five hours across the region at the end of January. Some 20 municipalities have reported weather damage, the most extensive on the Eyre Peninsula.

The flooding has washed away parts of the railway linking the eastern states with Western Australia and the Northern Territory, while sections of the Australian Rail Track Corporation network between Adelaide and Tarcoola have temporarily ceased operation, with repair works under way along a section of track over 300km in length.

Work to repair washed out rail tracks that connect South Australia to Perth and Darwin could take weeks, leaving freight to be shifted by trucks.

The company said up to eight areas between Adelaide and Tarcoola were “still inaccessible due to flood waters”.

“We’ve had what meteorologists have described as a one-in-200 or one-in-300-year weather event, which has significantly damaged our network,” a company spokesman said.

“We’ve seen rivers flooding where they shouldn’t flood and track washed away as a result of the flooding incident.

Water levels are slowly receding along the Stuart Highway, the main road connecting South Australia with the Northern Territory, but the 250-kilometre stretch from Glendambo to Coober Pedy remains closed.

Dozens of vehicles have been left stranded, and road freight to the Northern Territory is now being diverted through Queensland.

Western Roads Federation’s CEO, Cam Dumesny, said freight that would typically be moved by rail was now being moved by road at a time the trucking industry was “critically short of drivers”.

“About 80 per cent of WA’s land freight from the eastern states comes by rail,” he said.

The South Australian government has declared a major emergency, with flooding and storm damage affecting parts of the state.

Police Commissioner Grant Stevens said the declaration was appropriate given the extent of the significant damage, including major disruptions to road and rail networks connecting the state to Western Australia and the Northern Territory.

The flooding has washed away parts of the railway linking the eastern states with Western Australia and the Northern Territory, while sections of the Australian Rail Track Corporation network between Adelaide and Tarcoola have temporarily ceased operation, with repair works under way along a section of track over 300km in length.

EU: gas and nuclear investments can be green
Scroll to top