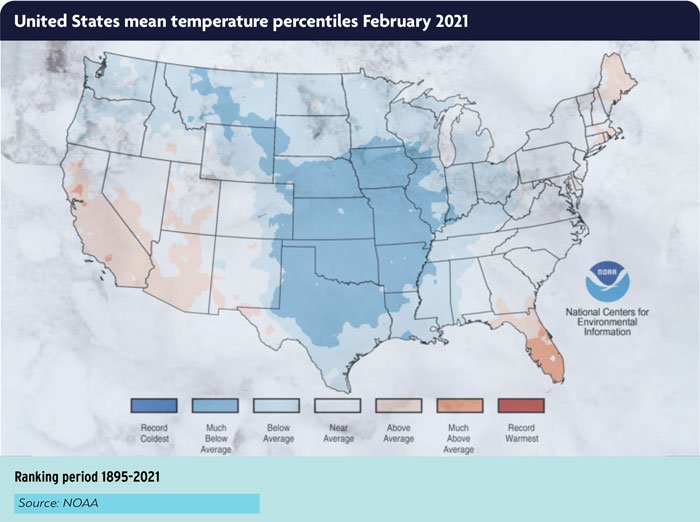 The US suffered its coldest February in over 30 years and a polar vortex created unprecedented temperatures in many areas of the country.

Scientists at NOAA’s National Centres for Environmental Information said the month saw temperatures plunge to historic lows in some parts of the country, including nearly all of Texas, as an Arctic air mass gripped much of the nation.

The average temperature across the contiguous U.S. in February was 30.6 degrees F, 3.2 degrees below the 20th-century average, making it the 19th-coldest February in the 127-year record. It was also the coldest February since 1989.

February’s average precipitation was 1.99 inches (0.14 of an inch below average), which ranked in the middle-third of the historical record.

Above-average precipitation fell across much of the Northwest, as well as portions of the East Coast and Ohio Valley. North Carolina saw its eighth-wettest February on record for the month, while South Carolina had its 10th wettest.

“Meteorological winter (December through February) was quite mild and dry across the contiguous U.S,” said the NOAA. “The average temperature was 33.6 degrees F, 1.4 degrees above average, placing Winter 2021 in the warmest third of the winter record. Maine had its third-warmest winter; California had its 12th warmest.

“Total precipitation this winter was 6.10 inches — 0.69 of an inch below average — which ranked among the driest one-third of winters in 126 years. North Dakota had its third-driest winter on record, while Virginia and Delaware had their ninth and 11th-wettest winters, respectively.”

It was described as “a brutally cold month for Texans”.

Last month brought the coldest air since December 1989 to much of the state. Several locations across central Texas — including Austin and Waco — broke records for the longest streak of below-freezing temperatures. Every county in Texas was under a Winter Storm Warning in mid-February and experienced wind chill values below zero as far south as the Rio Grande River and north-eastern Mexico.

Alaska saw its coldest February in 22 years. In Anchorage, the temperature never rose above 30 degrees F for the entire month, the first month since December 1998 with all daily high temperatures remaining below freezing.

0
SHARE:
Natural habitats now worth more than if developed