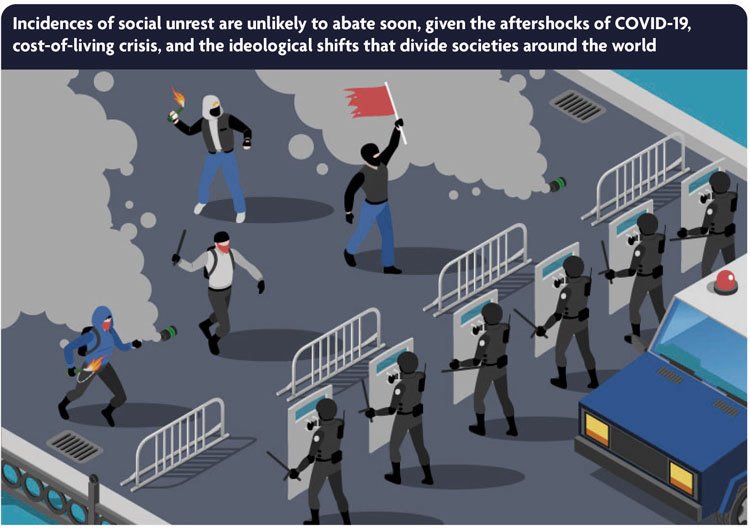 Preparing for a rise in social unrest

Businesses should prepare for a rise in civil unrest incidents as the cost-of-living crisis follows hard on the heels of the COVID pandemic, according to Allianz Global Corporate & Specialty (AGCS).

With confidence in traditional sources of information and leadership being undermined, the role of social media platforms in activating civil unrest is becoming increasingly influential, it suggested. Strikes, riots and violent protest movements pose risks to companies because in addition to buildings or assets suffering costly material damage, business operations can also be severely disrupted with premises unable to be accessed, resulting in loss of income.

“Incidences of social unrest are unlikely to abate any time soon, given the aftershocks of COVID-19, the cost-of-living crisis, and the ideological shifts that continue to divide societies around the world. Businesses need to be alert to any suspicious indicators and designate clear pathways for de-escalation and response, which anticipate and avert the potential for personnel to be injured and/or damage to business and personal property.”

The United Nations has warned of the destabilising potential of disrupted supply chains and surging food, fuel and fertiliser prices, particularly in the context of Russia and Ukraine representing around 30% of the world’s supply of wheat. “All of this is planting the seeds for political instability and unrest around the globe,” said UN Secretary-General Antonio Guterres in March 2022. Meanwhile, the risk consulting firm Verisk Maplecroft sees a rise in civil unrest as inevitable, in middle-income countries, which were able to offer social protection during the pandemic but will now find it difficult to maintain that level of spending as the cost-of-living surges.

According to the Verisk Civil Unrest Index Projections, 75 countries will likely see an increase in protests by late 2022, resulting in, for example, a higher frequency of unrest and more damage to infrastructure and buildings. The outlook is most bleak for the 34 countries that face significant deterioration by August 2022. More than a third of these states are in Europe and Central Europe (12), followed by the Americas (10), Africa (6), Middle East and North Africa (3) and Asia (3).

Economic and insured losses from previous protests have been significant, creating significant claims for companies and their insurers. In 2018, the Gilets jaunes movement in France rallied to protest fuel prices and economic inequality, with French retailers losing some $1.1billion in revenue in just a few weeks. A year later in Chile, large-scale demonstrations were sparked by an increase in subway fares, leading to insured losses of some $3 billion.

In the US, the 2020 protests over the death of George Floyd in police custody are estimated to have resulted in over $2 billion in insured losses, while the South African riots of July 2021, which followed the arrest of former president, Jacob Zuma, and were fuelled by job lay-offs and economic inequality, caused damage worth some $1.7 billion. Earlier this year in Canada, France and New Zealand, demonstrations against Covid-19 restrictions included convoys of vehicles creating disruption across major cities.

A network of disruption

The influence of social media networks plays an increasing role in mobilising protesters and intensifying social unrest. “The unifying and galvanising effect of social media on such protests is not a particularly recent phenomenon, but during the COVID crisis it combined with other potentially inflammatory factors such as political polarisation, anti-vaccination sentiment, and growing mistrust in government to create a perfect storm of discontent,” says Todorovic.

“Geography was less of a barrier too. Those with like-minded views were able to share opinions more easily and mobilise in greater numbers more quickly and effectively. In a world where trust in both government and media has fallen sharply, misinformation could take hold and partisan grievances be intensified and exploited.”

Companies should review and update their business contingency plans if necessary, considering any supply chain vulnerabilities. They should also review their insurance policies in the event of increasing local unrest activity. Property policies may cover political violence claims in some cases, but insurers offer specialist coverage to mitigate the impact of strikes, riots and civil commotion (SRCC).

“The nature of political violence threats is evolving, as some democracies become unstable, and certain autocracies crack down heavily on dissenters. Unrest can occur simultaneously in multiple locations as social media now facilitates the rapid mobilisation of protestors. This means large retail chains, for example, could suffer multiple losses in one event at various locations in a country,” says Todorovic.

How companies can prepare and prevent the worst

Best practices for how companies should prepare for or respond to such civil unrest incidents depend on many factors, including the nature of the precipitating event, proximity of location and the type of business. Allianz Risk Consulting has developed a list of technical recommendations for businesses and individuals to help mitigate the risks from civil unrest situations, considering these variables and associated pathways for de-escalation, communication, and response.

To read the full AGCS outlook article on civil unrest and the cost-of-living crisis click here. 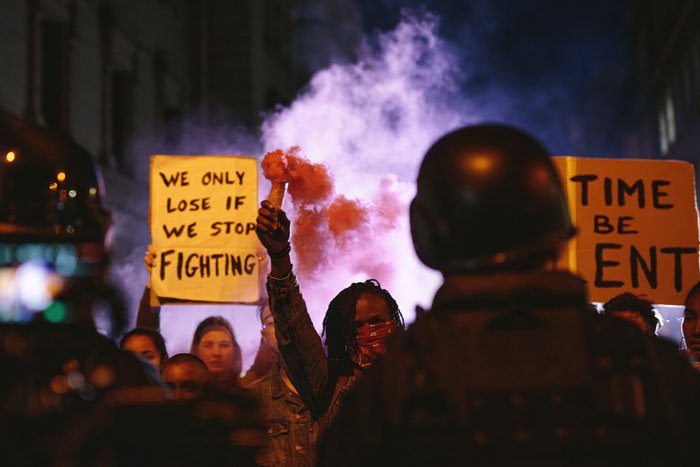 According to the Verisk Civil Unrest Index Projections, 75 countries will likely see an increase in protests by late 2022, resulting in, for example, a higher frequency of unrest and more damage to infrastructure and buildings. The outlook is most bleak for the 34 countries that face significant deterioration by August 2022. More than a third of these states are in Europe and Central Europe (12), followed by the Americas (10), Africa (6), Middle East and North Africa (3) and Asia (3).