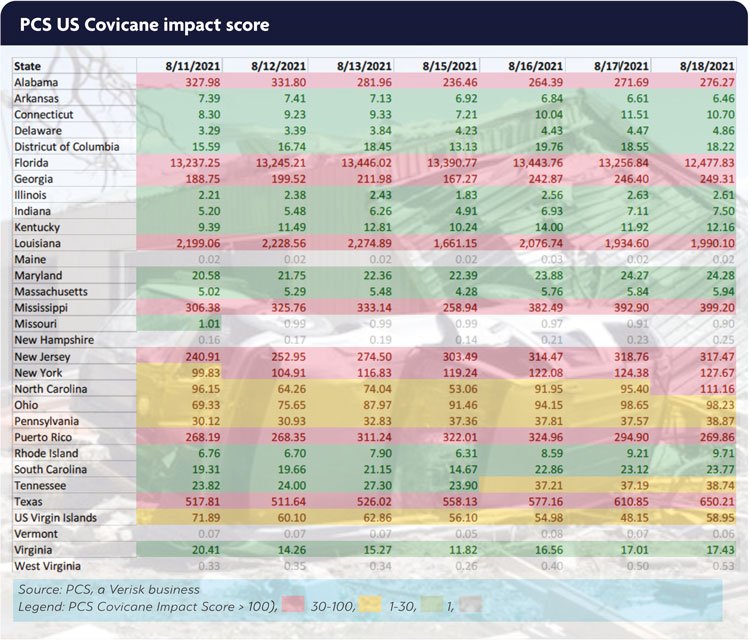 The current activity in the Atlantic Ocean should be enough to remind the (re)insurance industry that the risk of a hurricane impacting states in the US with high rates of COVID-19 transmission remains a significant concern, according to PCS.

Releasing its latest Covicane Impact Briefing on 20 August, PCS noted that It is still too early to ascertain the impact of Tropical Storm Fred on transmission of the virus, adding that the full implications could take several weeks to materialize – longer if there’s further transmission as a result of post-event rebuilding and elongated claim lifecycles.

An example of the concerns PCS mentioned is seen with the flooding in North Carolina attributable to Tropical Storm Fred, where over 250 first responders were conducting search and rescue operations.

North Carolina Governor Roy Cooper also addressed COVID during his Fred briefing, mentioning that the vaccination rate within the state is not where they want to be while encouraging constituents to get vaccinated.

Writing ahead of Hurricane Henri’s track into parts of New England on 22 August, PCS noted that such a track “would hit one of the most vaccinated parts of the country, which could provide insight into how post-tropical storm COVID-19 transmission could vary based on state vaccination rate”.

As hurricane season continues from summer into autumn, these early lessons could be directly useful later this year, it added.

PCS also commented on the wider US vaccination programme: “There have been increases in rates of full vaccination, including in states where such rates were already quite low. However, there’s still more work to be done. Gulf of Mexico states (and others in the southeastern part of the country) continue to post rates of full vaccination below 50 percent, with Florida the lone exception at 50.09 percent, as of this writing. Of course, those are the states that also tend to be impacted by more (and larger) tropical storm events.”

“Today [20 August], 10 have exceeded that threshold. An eleventh, North Carolina, is close. Florida’s score is roughly unchanged (12,478), although it pushed past 13,000 for the five days prior. This suggests that a single day of anomalous reporting brought the seven- day rate of daily new cases down, which has impacted the daily score. Scores in Georgia, Mississippi, and Texas have risen sharply, with Alabama declining and Puerto Rico declining.”