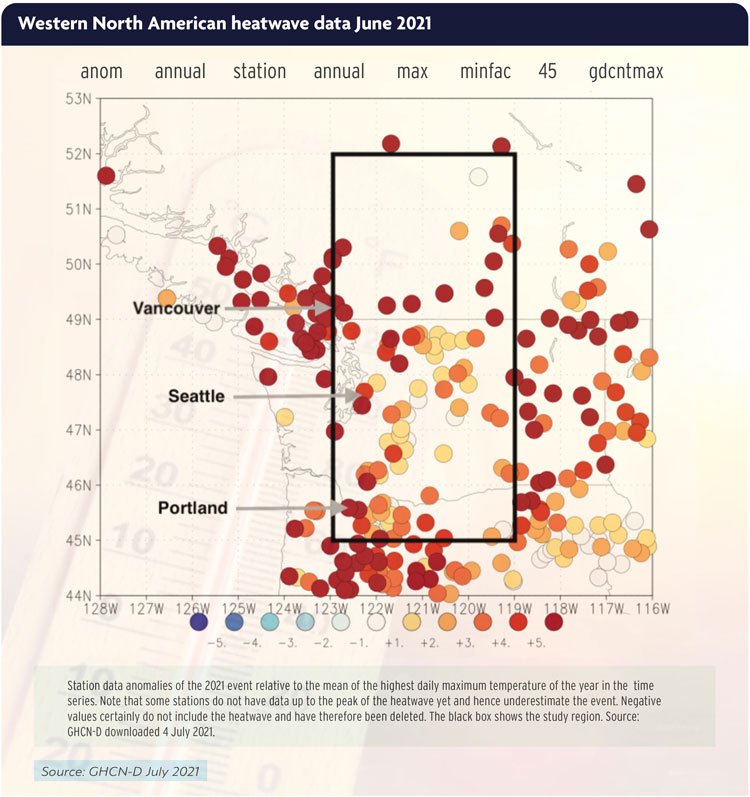 The North American continent has been told by a leading scientific institution to brace itself for more frequent extreme temperatures, following record highs and widespread damage at the end of June.

At the end of June, Pacific northwest areas of the US and Canada experienced temperatures never previously observed, with records broken in many places by several degrees Celsius.

Multiple cities in the US states of Oregon and Washington and the western provinces of Canada recorded temperatures far above 40ºC (104 ºF), including setting a new all-time Canadian temperature record of 49.6ºC in the village of Lytton.

From a risk perspective the consequences were severe: shortly after setting the record, Lytton was largely destroyed in a wildfire, for example, while the exceptionally high temperatures led to spikes in sudden deaths, and sharp increases in hospital visits for heat-related illnesses and emergency calls.

The WWA said that the observed temperatures made it hard to quantify with confidence how rare the event was, but the most realistic statistical analysis gives about a 1 in 1000 year event in today’s climate.

The report added that there are two possible sources of this extreme jump in peak temperatures. The first is that this is a very low probability event, even in the current climate which already includes about 1.2°C of global warming — the statistical equivalent of really bad luck, albeit aggravated by climate change.

The second option is that so-called “nonlinear interactions” in the climate have substantially increased the probability of such extreme heat, much beyond the gradual increase in heat extremes that has been observed up to now.

What the WWA found was that an event such as the Pacific Northwest 2021 heatwave is still rare or extremely rare in today’s climate, yet would be virtually impossible without human-caused climate change. As warming continues, it added, it will become a lot less rare:

“Our results provide a strong warning: our rapidly warming climate is bringing us into uncharted territory that has significant consequences for health, well-being, and livelihoods.”

It added: “Adaptation measures need to be much more ambitious and take account of the rising risk of heatwaves around the world, including surprises such as this unexpected extreme. Deaths from extreme heat can be dramatically reduced with adequate preparedness action.”

“Heat action plans that incorporate heatwave early warning systems can strengthen the resilience of cities and people. In addition, longer-term plans are needed to modify our built environments to be more adequate for the hotter climate that we already experience today and the additional warming that we expect in future.  In addition, greenhouse gas mitigation goals should take into account the increasing risks associated with unprecedented climate conditions if warming would be allowed to continue.”

And in a stark warning, the WWA said that the future will be characterized by more frequent, more severe, and longer heatwaves, highlighting the importance of significantly reducing our greenhouse gas emissions to reduce the amount of additional warming.

Furthermore, it adds that the latest heat-related death numbers are alarming, yet they are likely a severe undercount and the real toll will only become clear after mortality statistics are reviewed for the role of heat in exacerbating underlying conditions.

The full study can be accessed here.

Multiple cities in the US states of Oregon and Washington and the western provinces of Canada recorded temperatures far above 40ºC (104 ºF), including setting a new all-time Canadian temperature record of 49.6ºC in the village of Lytton.