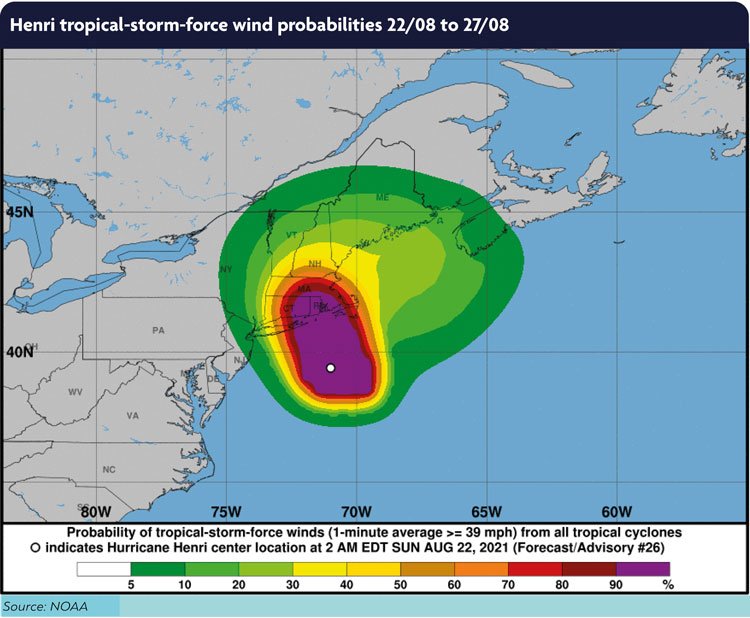 Dangerous storm surge inundation was expected in portions of Long Island, Connecticut, Rhode Island, and south-eastern Massachusetts from Tropical Storm Henri, according to the US National Hurricane Center (NHC).

The weather event had been downgraded from a hurricane in the early hours of Sunday morning.

The centre of the storm was projected to pass just off the eastern tip of Long Island by midday on 22 August, with storm warnings extended from coastal Connecticut and Rhode Island to near the old whaling port of New Bedford, Massachusetts, and across the luxurious oceanfront estates of New York’s Hamptons to the summer getaway of Fire Island.

The first thunderstorms bringing what could be up to six inches (15cm) of rain arrived late on Saturday in New York, and flash flooding began in some areas overnight. Bands of heavy rain overwhelmed storm drains and drivers ploughed through foot-deep water in a few spots in New York City, and Newark and Hoboken, New Jersey.

Tropical storm-intensity winds were expected to begin striking the coast at around 8am on 22 August.

A Storm Surge Warning has been issued for Long Island, Connecticut, Rhode Island, and south-eastern Massachusetts, according to the NHC.

Hurricane conditions were expected to begin in portions of Long Island, Connecticut, and Rhode Island, where a Hurricane Warning was in effect.

Heavy rainfall may lead to considerable flash, urban, and small stream flooding, along with the potential for widespread minor to isolated moderate river flooding over portions of Long Island, New England, eastern New York and New Jersey, the NHC said.

It added that swells from Henri will continue to affect much of the east coast of the US during the next day or so. These swells could cause life-threatening surf and rip currents.

Governor Andrew Cuomo, who is to leave office on Monday after resigning over a sexual harassment scandal, pleaded with New York residents on Saturday to make last-minute preparations, warning that heavy rain, wind and storm surge from Henri could be as devastating as Superstorm Sandy in 2012.

Major airports in the region remained open as the storm approached, though hundreds of Sunday’s flights were cancelled. Service on some branches of New York City’s commuter rail system was suspended through Sunday, as was Amtrak service between New York and Boston. 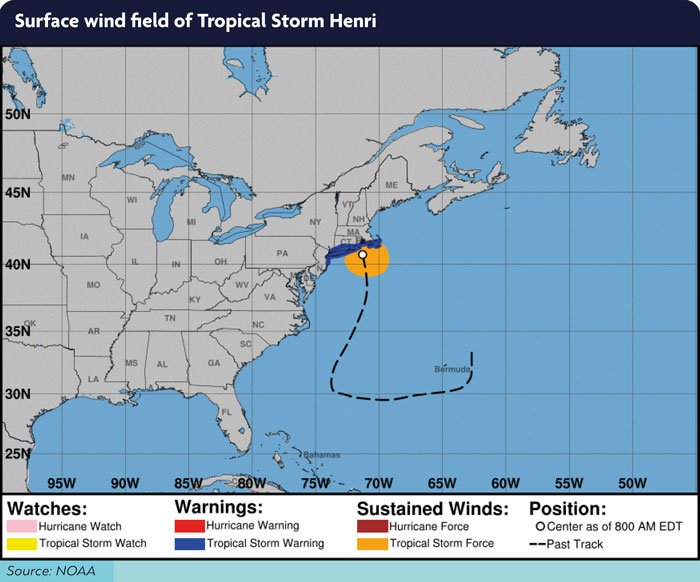