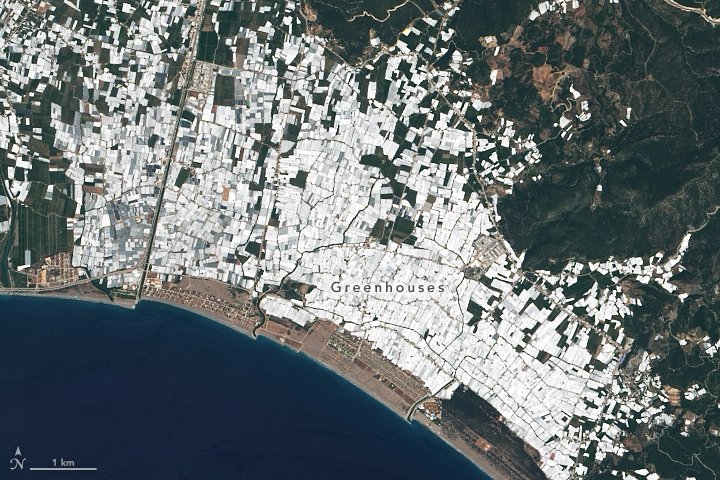 New pictures from space have sought to provide a visual warning over the growing use of plastics in agriculture.

NASA has published a range of images taken by the Operational Land Imager (OLI) on Landsat 8 which highlights the scale of both plastic greenhouses and plastic mulch covering the planet’s farmland.

It said since a University of Kentucky horticulture professor developed the first plastic greenhouse in the 1950s, plastic greenhouses have been viewed as an effective and inexpensive way to increase farm yields. They allow for the extension of growing seasons and enable growers to have full control over temperature and lighting conditions.

“The use of plastic on farms has become so common in recent decades that there is a term for it, plasticulture,” said NASA. “While there’s still no easy, globally consistent way of tracking how far plasticulture has spread, there are plenty of signs that its footprint is significant. By some estimates, plastic greenhouses now cover as much as 3 percent of China’s farmland. South Korea, Spain, and Turkey also use significant amounts of agricultural plastic for greenhouses.”

The space agency have published a number of natural-colour satellite images of farmland around the Turkish towns of Demre and Kumluca, which they say highlight the way in which plasticulture is transforming the landscape.

“Many of the greenhouses have opaque or translucent plastics that appear white from a distance,” it said. “Open farmland is generally brown. Forests are dark green.

Tomatoes, peppers, and cucumbers are commonly grown in greenhouses in this area. With 772 square kilometres (298 square miles) of land covered by greenhouses, Turkey ranks fourth in the world in greenhouse cultivation, according to one team of researchers from Çukurova University. That equates to an area roughly the size of New York City.

“Greenhouses aren’t the only way that farmers use plastic,” said NASA. “When draped over rows of crops, thin sheets of plastic mulch are often used to protect plants from pests and weeds, as well as reduce the water needed for irrigation. By one estimate, plastic mulches cover as much as 13 percent of China’s farmland, making the country the largest user of agricultural plastic in the world.

“While plastics aid crop production, their widespread use by farmers has raised concerns about the environmental impacts and sustainability. Plastics produce toxic air pollution when burned, and they break down into microplastics that often end up in soils and water, according to a 2021 report from the UN Food and Agriculture Organization.”

Insurers told to walk away from Russian investments
Scroll to top