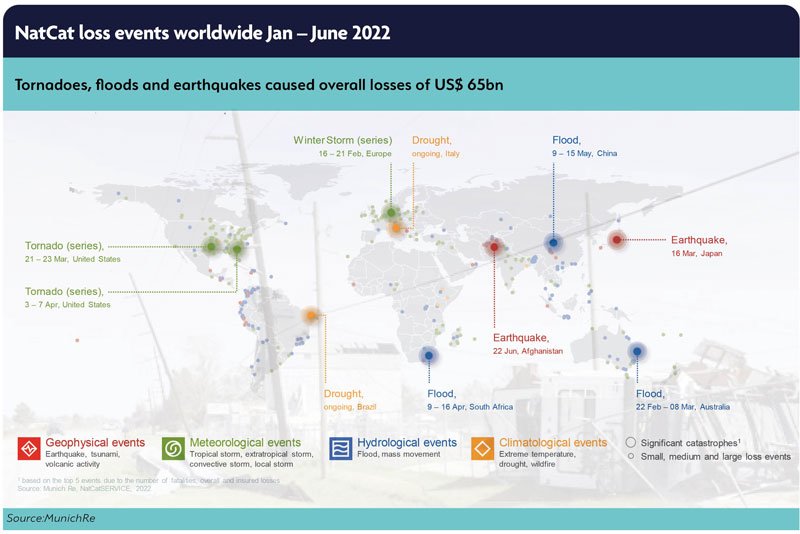 Munich Re: droughts and wildfires a consequence of climate change

Munich Re has stressed the dramatic consequences of climate change as it estimated that natural catastrophe losses reached some $65 billion in the first half of 2022, with record flood losses in Australia.

Overall, events in the period drove economic losses of $65 billion, down on last year’s $105 billion, with insured losses staying roughly the same at approximately $34 billion, according to the carrier.

In terms of insured losses, the costliest event was the extreme rainfall and floods in eastern Australia at a provisional $3.7 billion, with economic losses from this event totalling $6.6 billion.

Record levels of rainfall occurred in parts of Queensland and New South Wales, with some areas recording their highest flood peaks since 1893.

US losses led the loss figure for H1 2022, with overall losses reaching some $28 billion, of which $19 billion were insured.

According to Munich Re, the main driver of the losses in the US relatds to a single severe thunderstorm front that produced tornadoes in April, destroying asset worth more than $3 billion, of which around 75% were insured.

Other significant events included a magnitude 7.3 earthquake that struck of the east of the main island Honshu in Japan, which drove insured losses of $2.8 billion and total losses of $8.8 billion.

In total, Munich Re found that the Asia-Pacific region accounted for some $22 billion of total economic losses from nat cats in H1 2022, of which $8 billion were insured.

The difference between insured and economic losses (known as the protection gap) from natural disasters in the Asia-Pacific and the U.S. is clear, and is becoming more apparent as climate change, and its impacts accelerate.

Europe also felt the force of winter storms through H1 2022, which brought hurricane-force winds to parts of the continent, notably in England, Ireland, Belgium, the Netherlands, Germany, and the Baltic coast. Munich Re suggested that the overall cost from these storms is some $5.2 billion.

“They may all be individual events with different causes, but taken together, one thing is becoming extremely clear: the powerful influence of climate change is becoming ever more evident!” added Rauch.

“And the consequences for people across the world are becoming ever more palpable. The IPCC has made an even clearer diagnosis, stating that weather-related disasters such as heatwaves, torrential rainfall or droughts on a warmer Earth will increase in both frequency and intensity. Heatwaves will tend to last longer and bring more extreme temperatures. This will differ from region to region – in Europe it will be the south that is hit hardest.”

The greatest humanitarian tragedy witnessed in H1 2022 was the 5.2 magnitude earthquake in Afghanistan, which claimed the lives of roughly 1,200 people.

Overall, Munich Re reported that some 4,300 people lost their lives in natural disasters in the first half of 2022.