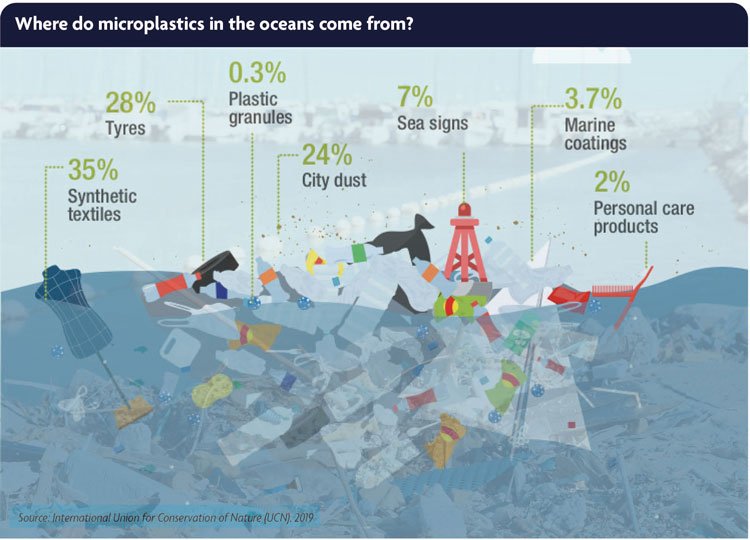 Recent research from the University of Hull in England indicated that microplastics were found in almost all people tested. Should we be concerned?

The invention and use of plastic has been a technological and design miracle for humanity, but it is now proving to be one with serious and widespread consequences not just the environment, but possibly to human health.

A 2017 study published in the National Library of Medicine estimated that some  8.3 billion tonnes of plastic have been produced since the end of the Second World War, when they started to become ubiquitous. Of all the waste generated by these materials, 79% has ended up in nature.

Indeed by 2050, it is predicted that the world’s natural areas will be home to 12 billion tonnes of plastic. Part of this problem is made visible to us through images of widespread plastic refuse.  But another part is invisible to the eye: so-called microplastics.

Microplastics are small pieces of plastic, often about the same size as sesame seed, and approximately five millimetres long. They are a result of plastic pollution, and are present in a variety of products, from synthetic clothing to plastic bottles.

They consist of carbon and hydrogen atoms bound together, and often contain chemicals such as phthalates and polybrominated diphenyl ethers (PBDEs). These chemicals leach out of the plastics after entering the environment.

Richard Thompson, a marine ecologist at the University of Plymouth in the UK, first coined the term in 2004 to describe plastic particles smaller than 5 millimetres across, after his team found them on British beaches.

Scientists have since seen microplastics everywhere they have looked: in deep oceans; in Arctic snow and Antarctic ice; in shellfish, table salt, drinking water and beer; and drifting in the air or falling with rain over mountains and cities.

Where do microplastics come from?

Scale of the problem

It is estimated that there are now trillions of microplastic particles in the marine environment.

For example, research by the University of Plymouth has shown that up to 94,500 microbeads could be released from an exfoliant in a single use; and that a single 6kg load of washing could release over 700,000 fibres to waste water. Some of these are likely to pass through waste water treatment and into the environment.

According to the university, it is estimated that plastics (including microplastics) could take hundreds or even thousands of years to break down and therefore plastics debris is accumulating in our oceans year on year. Microplastics can be mistaken for food by birds and marine life and there is evidence that this can cause harm.

It adds that microplastics have also been documented in all five of the ocean’s subtropical gyres and some of the greatest accumulations of microplastic are found thousands of miles from land.

Gyres are circular ocean currents formed by the Earth’s wind patterns and the forces created by the rotation of the planet. Indeed, microplastics have even been found in the snow at Mount Everest.

According to the University of Plymouth, microplastics are of concern because of their widespread presence in the oceans and the potential physical and toxicological risks they pose to organisms.

Microplastics can be ingested by a wide range of animals and have been found in organisms ranging in size from small invertebrates to large mammals.

Laboratory studies have shown there is potential for this to lead to harmful effects and it is estimated that unless we change our ways there, within this century, will be wide scale and potentially irreversible effects in the natural environment.

While there are still many unanswered questions about the amounts of microplastic debris that might be accumulating and the types of harm they could present, there is a growing consensus we should urgently take action to reduce the flow of plastic into the environment.

How can we tackle the potential problem?

In 2019, the European Chemicals Agency (ECHA) made an attempt to reduce human exposure to these particles by proposing a restriction on microplastics placed on the EU/EEA market.

This means firms would have to stop adding microplastics to almost all products, from cosmetics to detergent, which in turn would prevent the release of 500,000 tonnes of microplastics over a 20 year period.

The legal restriction is expected to become law by the end of 2022, however certain environmental groups claim the proposal has some major loopholes.

Some sectors may have up to eight years to drop microplastics, while so-called ‘biodegradable’ plastic could escape the ban altogether.

In an attempt to clean and reduce the microplastics already exposed to the ocean, a number of solutions have been proposed globally.

Last year, for example a project conducted by the UK’s Plymouth Marine Laboratory  found that a small collection of mussels has the potential to filter 250,000 pieces of microplastics in an hour.

By 2050, it is predicted that the world’s natural areas will be home to 12 billion tonnes of plastic. Part of this problem is made visible to us through images of widespread plastic refuse.  But another part is invisible to the eye: so-called microplastics.