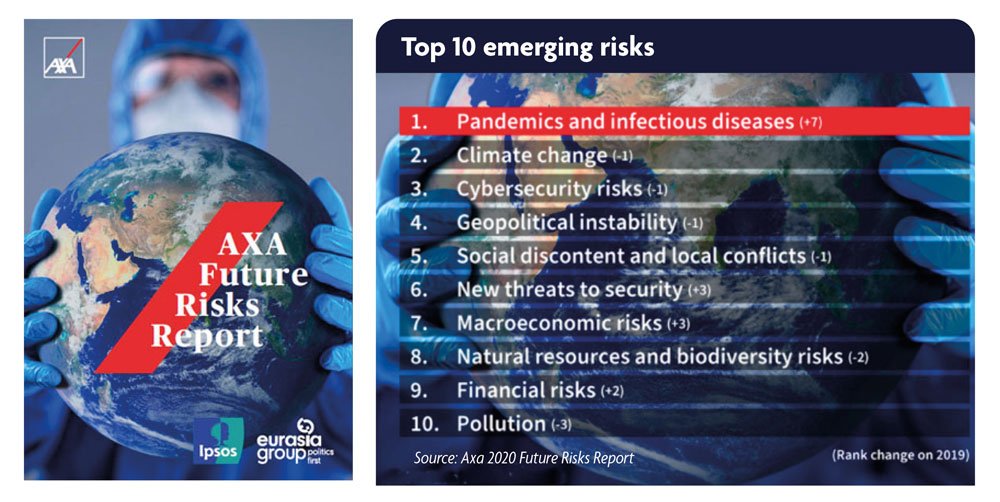 Perhaps unsurprisingly in a year in which the economic consequences of the Covid-19 pandemic have been profoundly felt, experts now consider macroeconomic risk to be the seventh-most-important emerging risk

Last year, they ranked it tenth.

As Axa points out the Covid-19 pandemic is just as much an economic crisis as it is a health crisis. According to the report, lockdowns caused GDP to plunge 12% in the EU and 33% in the US in the second quarter of 2020.

The report noted that, “when asked which macroeconomic risks are most important, experts rank durable mass unemployment first. In the long term, younger people who are just entering the job market are likely to be affected most”.

Macroeconomic risk is felt most acutely in Spain (where 35% of experts consider it an important risk), Italy (31%), and Mexico (31%). Axa suggests that this could be because these countries have been particularly affected by Covid-19. However, unemployment in the US has risen to above 10%, yet just 13% of US experts consider macroeconomic risk to be important—the lowest proportion globally.

Financial risks have also risen up the agenda to be experts’ ninth-most-important emerging risk this year, and increased public and private debt levels are of particular concern.

Indeed, global net public debt is expected to rise to 85.3% this year from 69.4% last year, a risde which Axca suggests will change the playing field for younger generations, who will inherit unprecedented levels of debt:

“Debt is going to be a major issue in the next 10 to 20 years,” said Gilles Moëc, chief economist of Axa Group. “We are responding to the crisis by allowing a massive increase in both public and private sector debt. It’s unavoidable and the right thing to do, but we must acknowledge that many countries will have more debt as a percentage of GDP than at any time since the Second World War. That’s fine now, as monetary policy is very accommodating, but when normal monetary policy resumes, it may cause a crisis—particularly for emerging markets.”

As such, Axa raises the pertinent question: are public authorities prepared to respond to macroeconomic and financial risks?

“Our surveyed experts are confident that they can respond to financial risks, but are much less confident when it comes to macroeconomic risks. This reflects the fact that while many governments and central banks have already responded much more rapidly than they did to the 2008 crisis, it may not be enough given the unprecedented scale of the economic impact.”

Nice mayor: Alex is worst storm for a century
Scroll to top