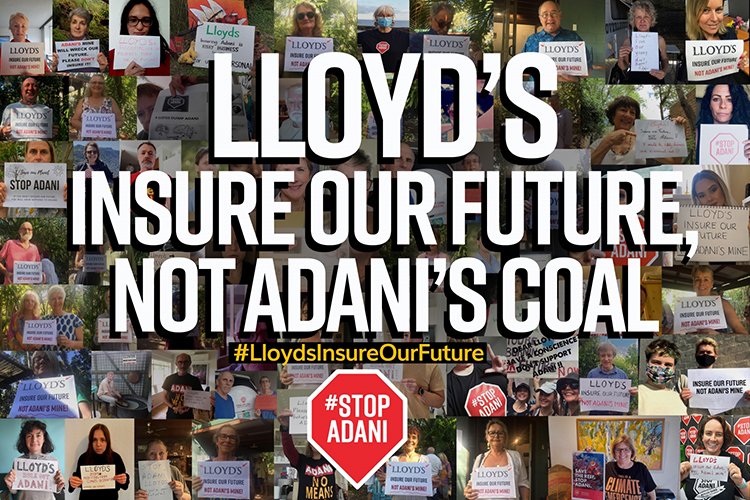 Lloyd’s urged to ban mine coverage

Climate campaigners are to step up their campaign against Lloyd’s as they mount a two-day protest next week.

Activists from the Stop Adani campaign and Pacific Climate Warriors will join forces 27 and 28 October to call on Lloyd’s of London and its members to follow the lead of 23 major insurance companies, including several Lloyd’s syndicates, and stop insuring Adani’s Carmichael coal project in Australia.

Campaigners say, if built, Adani’s Carmichael mine will, amongst a range of other serious negative impacts, add an estimated 4.6 billion tonnes of carbon pollution to our atmosphere over its lifetime.

Lloyd’s has confirmed that some of its members started insuring Adani’s coal mine in 2019, however, campaigners say it refuses to name the members involved.  They add Lloyd’s also so far refuses to put in place a market wide policy excluding all of its members from insuring new coal mines, despite the climate science and the fact that most other leading insurers have such a policy in place.

Lindsay Keenan, Insure our Future campaign spokesperson said: “It is time for Lloyd’s to put in place regulations that commit all of Lloyd’s market members to not insuring the Adani Carmichael coal mine, as part of a broader policy that moves Lloyd’s and its members away from insuring the fossil fuel projects that are driving climate change.”

Evidence that Lloyd’s member Aspen was involved came to light in June. When confronted, Aspen quickly responded that it understands the importance of environmental, social, and governance issues and therefore will not be renewing any insurance policies associated with the Adani Carmichael mine. Other Lloyd’s members including Allied World, Argo Group and CNA Hardy have also recently made clear that they are not involved with Adani’s mine.

“Exactly which Lloyd’s members are still insuring or plan to insure Adani is unclear and the subject of significant interest and concern,” said the groups in a statement today. “The Stop Adani campaign has been contacting Lloyd’s members one by one to rule them out and is now focused on a number of remaining members including Apollo, Arch, Brit, Hamilton Group, STARR, Lancashire, MAP and WR Berkley.”

In response to Lloyd’s involvement in the Adani coal mine, two actions will take place next week. On October 27, volunteers with the Insure our Future campaign will deliver two giant postcards to Lloyd’s CEO John Neal at Lloyd’s London HQ, on behalf of the Stop Adani campaign and the Pacific Climate Warriors. On October 28, the Stop Adani campaign and Pacific Climate Warriors will co-host an online rally during which 500+ participants are expected to take part in a series of social and digital actions asking Lloyd’s and its members to insure our future not Adani’s coal.

Claudia Lang, Stop Adani campaign spokesperson, said: “Lloyd’s of London is profiting from climate destruction by providing morally bankrupt companies like Adani with insurance. Adani’s climate wrecking coal project is a reputational disaster for companies who associate with it, that’s why 24 major insurers have taken a stand and publicly ruled out insurance for Adani, Lloyd’s must follow their lead and stop insuring Adani.”

Inangaro Vakaafi, Pacific Climate Warriors Polynesian Council of Elders member, added: “Lloyd’s of London is supporting destructive coal projects like Adani’s coal mine that are driving the climate crisis. Mining and burning coal from Adani’s mega mine will wreck our chance to protect our Pacific homelands from climate impacts. We are people who are living the realities of climate change right now. As Pacific people, we will continue to fight for our homes, our ways of life and our communities. We demand that Lloyd’s starts acting to protect the Pacific and show leadership in insurance marketing by ruling out insurance for Adani.”

Lloyd’s said it took the issue of climate change seriously and would continue to do so, adding that its role fell short of telling syndicates the risks they can and cannot write.

“At Lloyd’s, we take climate change extremely seriously and recognise the important role insurance is playing in supporting, accelerating and de-risking the transition to a low carbon economy,” said a spokesperson. “Whilst the Lloyd’s Corporation does not set underwriting policy in the market, unless there is a specific legal or regulatory requirement to do so, we are nevertheless committed to building consensus across the 90-plus syndicates that operate at Lloyd’s to drive this transition.

“Many firms in the Lloyd’s market are taking steps towards restricting insurance coverage for thermal coal extraction or energy production, and are divesting in companies involved in the coal sector. In 2020 Lloyd’s Corporation will build on this momentum by working with the market to ensure it complies with requirements for disclosure and risk management, as well as providing guidance to firms in the Lloyd’s market planning to withdraw insurance cover and investments for carbon-intensive projects.

“Lloyd’s Corporation will maintain its divestment policy for its Central Fund, introduced in 1 April 2018, that screens out investments in companies heavily associated with coal.

“In 2020, Lloyd’s Corporation is continuing to analyse the risks and opportunities associated with the transition to a low carbon economy for the benefit of the market and our customers to develop innovative insurance solutions for low-carbon sectors including renewables, the circular economy and electric transport, in line with evolving UN climate aims.”