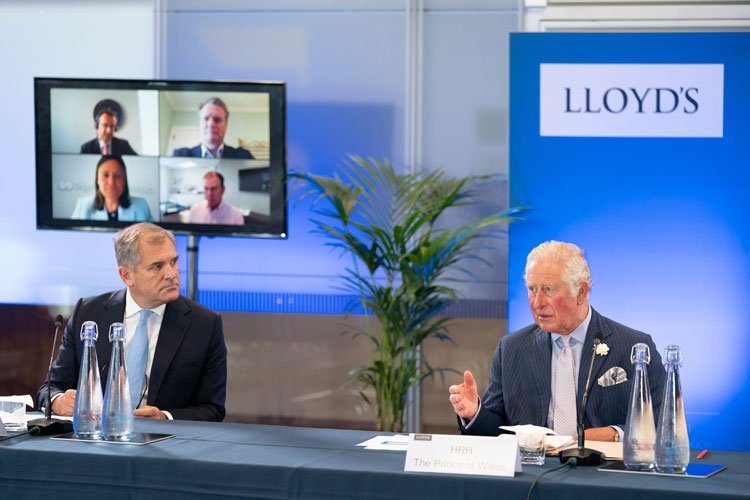 Lloyd’s Chairman said he believes HRH the Prince of Wales will hold the industry’s “feet to the fire” following his launch of a task force to look at ways in which insurers can lead the battle against climate change.

HRH The Prince of Wales launched his Sustainable Markets Initiative (SMI) Insurance Task Force during a visit to Lloyd’s yesterday calling on the industry to put the planet and nature at the heart of its operations.

Speaking after the visit Bruce Carnegie-Brown (above left)  said the Prince had been clear that he wanted to see action.

“As he was leaving, he said to me that he wanted to remain involved and that he wanted reports on how we are doing,” he said. “When people make promises to the Prince, they tend to keep them. I believe he will hold our feet to the fire on this.”

The SMI Insurance Task Force, convened by HRH and chaired by Lloyd’s, is comprised of executives from many of the world’s largest insurance and reinsurance companies and came about after the Prince’s approach Lloyd’s to lead the initiative in February.

In launching the task force Prince Charles said: “Over the past eighteen months, I have convened leaders from across industries and investment in almost every sector of the global economy to accelerate, if possible, the transition to a more sustainable future – one where we build the world’s capacity to be resilient. Having listened to these industry, finance and investment leaders, I would like, if I may, just to outline three ways the Insurance industry can help:

“First of all, we must ensure we have the right market signals so that industry, investment and governments know the direction of travel.

“Second, we must unlock the ‘investment-to-investables’ pipeline and increase the number of investable and genuinely sustainable projects, including those that support adaptation and resilience. This also requires that we shift investment away from carbon-intensive assets towards climate risk-resilient assets, including natural capital.

“Third, we must find ways to mobilize capital and investment for building climate risk-resilient infrastructure, particularly in the most climate-impacted regions of the world, and I know a lot of them, I can assure you after visiting them over and over again throughout the Commonwealth.

“Surely it is better to invest in and build up the right type of infrastructure that will reduce the risk of damage, destruction and costs in future climate events? In fact, in the long run, it saves us money by putting the right resources upfront.

“As an industry, you have a unique and deep understanding of the evolving impacts and risks of climate change, and can help us mitigate and manage extreme weather events. As I have tried to indicate to this industry over a considerable number of years, the scale of the challenge that insurers face caused by new types or scales of climate-related events cannot be underestimated. Winter storm ‘Uri’ earlier this year is but one example. My sincere hope is that the industry will rise to these challenges and regard them as opportunities, and that it will avoid the temptation to restrict coverage but, rather, innovate new products.

“If we are to realise the aspirations of moving to a low carbon world by the middle of this century, there will have to be a seismic shift of investment into new industries and sectors. “This transition in favour of Nature, People and Planet can also represent the biggest opportunity for the insurance industry in recent times.”

The task force will form four sub committees. The first will focus on the creation of innovative insurance products, that will include the repurposing of existing covers.

The second will examine the sustainability of the claims process, with an focus on the use of sustainable materials to build back better following major claims events.

The third will focus on the issues around disaster recovery management.

Carnegie-Brown said the actions would including examining how global government aid, which is usually delivered post major events, could be used to build resilience prior to any loss. He added that such a move would allow the industry to insure countries and areas which at present would be deemed to be uninsurable.

The final group will look at how the industry can better use its huge investment funds to enhance sustainability.

At its launch the Task Force published its Statement of Intent, committing to provide climate positive financing and risk management solutions to support and encourage individuals and businesses around the world to accelerate their transition to a sustainable future.

Insurers on the task force has committed to drive climate positive action at pace, through a number of key initiatives. For commercial and individual customers, these actions will include adapting and expanding coverage for offshore wind projects in response to rapid growth and new technologies, alongside the implementation of “build back better” claims.

To support the rapid growth of green projects and innovation, the SMI Insurance Task Force will develop a framework to help unlock the more than $30 trillion in assets under management, increasingly directing capital towards investments that drive climate-positive outcomes in both developed and developing nations.

The task force has been challenged to provide output in time for the COP26 meeting later this year in Glasgow with Carnegie-Brown adding that its efforts will continue into 2022 and beyond.

The SMI Insurance Task Force, convened by HRH and chaired by Lloyd’s, is comprised of executives from many of the world’s largest insurance and reinsurance companies and came about after the Prince’s approach Lloyd’s to lead the initiative in February.