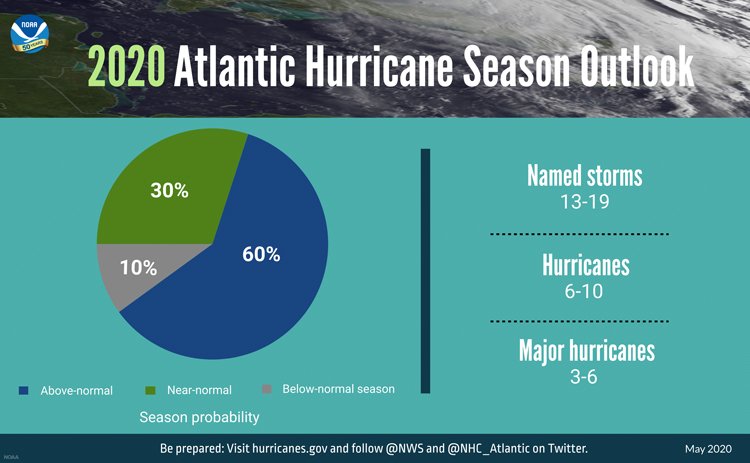 Insurers and the population of the US and Caribbean states have been warned to ignore the threat posed by the 2020 North Atlantic hurricane season at their peril.

Yesterday saw the official start of the season although its peak will not be until late August into November. However there have already been two named storms this year and the experts are predicting an above active season.

The NOAA said it provides these ranges with a 70% confidence. An average hurricane season produces 12 named storms, of which 6 become hurricanes, including 3 major hurricanes.

“As Americans focus their attention on a safe and healthy reopening of our country, it remains critically important that we also remember to make the necessary preparations for the upcoming hurricane season,” said Secretary of Commerce Wilbur Ross. “Just as in years past, NOAA experts will stay ahead of developing hurricanes and tropical storms and provide the forecasts and warnings we depend on to stay safe.”

The Centre said a combination of several climate factors is driving the strong likelihood for above-normal activity in the Atlantic this year. El Nino Southern Oscillation (ENSO) conditions are expected to either remain neutral or to trend toward La Nina, meaning there will not be an El Nino present to suppress hurricane activity. Also, warmer-than-average sea surface temperatures in the tropical Atlantic Ocean and Caribbean Sea, coupled with reduced vertical wind shear, weaker tropical Atlantic trade winds, and an enhanced west African monsoon all increase the likelihood for an above-normal Atlantic hurricane season. Similar conditions have been producing more active seasons since the current high-activity era began in 1995.

“Most forecasting groups and agencies are anticipating above-average activity in the basin this season, which comprises the North Atlantic Ocean, the Caribbean Sea, and the Gulf of Mexico,” he explained. “These forecasts reflect the state of the two main oceanic and climate factors that historically dictate hurricane activity in the basin: The El Niño-Southern Oscillation (ENSO) and sea surface temperatures in the equatorial Atlantic. ENSO is forecast to remain in a cool-neutral phase during the summer with an increasing chance of La Niña conditions later in the fall. If La Niña does develop, it would help reduce the vertical wind shear across the Atlantic, which typically enhances hurricane activity. Moreover, sea surface temperatures in the tropical Atlantic are expected to remain above average throughout the summer, which also typically increases hurricane activity in the basin.

“These forecasts only provide a guide to the anticipated level of activity across the Atlantic; they do not provide an indication of the expected number of storms to threaten land or make landfall. Although long-term statistics indicate that the probability of a hurricane making landfall in the U.S. increases during more active seasons, there are notable exceptions. 2010 was a particularly active year in the Atlantic but only one tropical storm made landfall in the United States (Tropical Storm Bonnie). Conversely, Hurricane Andrew, one of the most intense and costliest hurricanes in U.S. history, was one of only seven storms to develop during the quiet 1992 season. It therefore only takes one landfalling storm to make the season a memorable one.”

Mr Cosgrove added: “2020 marked a record sixth consecutive year (2015-20) that at least one storm has been named before the official start of the North Atlantic hurricane season on June 1. 2020 is also only the sixth season on record that two storms had been named before June 1. There’s no historical relationship between the date of the first named storm and the overall seasonal hurricane activity, so the early start to 2020 doesn’t necessarily provide us with any clues as to how the 2020 hurricane season might pan out.”