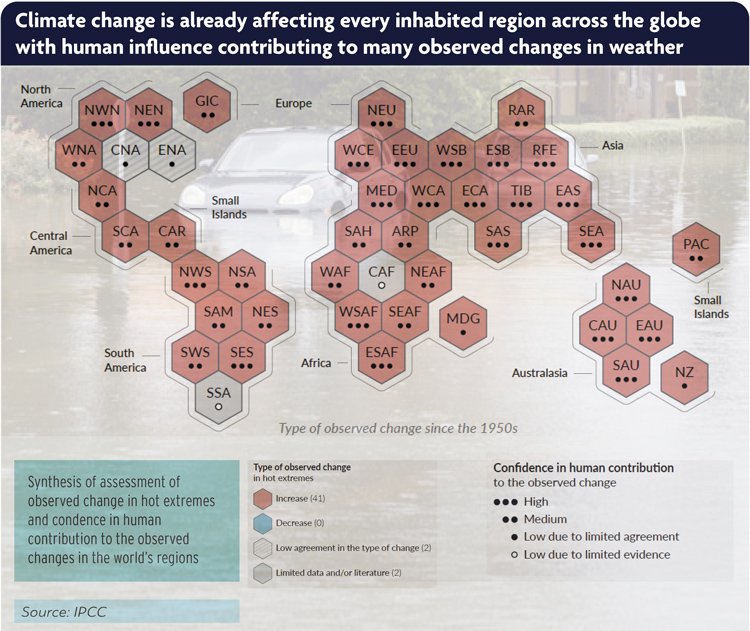 The question of whether Hurricane Ida, which struck Louisiana over the weekend as a category 4 hurricane, is natural or man-made may at first instance seem perverse. After all, extreme weather events such as hurricanes are, by their very essence, natural phenomena.

Yet the increasing frequency and severity of natural catastrophes in recent years also begs the question as to the extent to which this a naturally occurring series of weather patterns to which we should not attach undue importance, or whether such catastrophes are to a significant extent a result of man-made climate change.

Of course, such a question was raised by the recent seminal report by the UN’s Intergovernmental Panel on Climate Change (IPCC), which warned that humans are “unequivocally” driving global warming, with impacts already felt including heatwaves, flooding and rising sea levels.

The assessment from the IPCC says the world will reach or exceed temperature rises of 1.5C – a limit countries have pledged to try to keep to in order to avoid the most dangerous consequences of warming – over the next two decades.

The authors say that since 1970, global surface temperatures have risen faster than in any other 50-year period over the past 2,000 years. This warming is “already affecting many weather and climate extremes in every region across the globe”. Whether it is heatwaves like the ones recently experienced in Greece and western North America, or floods like those in Germany and China, “their attribution to human influence has strengthened” over the past decade.

According to Prof Ed Hawkins, from the University of Reading, UK, and one of the report’s authors, scientists cannot be any clearer on this point: “It is a statement of fact, we cannot be any more certain; it is unequivocal and indisputable that humans are warming the planet.”

Temperature rises will continue until mid-century, the report adds. Without fast, deep reductions in greenhouse gases they will, over the course of the 21st century, exceed both the 1.5C and 2C limits set by countries in the Paris climate treaty.

Stepping aside from the IPCC’s magnum opus, a closer look at Hurricane Ida also provides some pointers as to the impact of climate change in several ways.

Hurricane Ida made landfall as a top end category-4 storm near Port Fourchon, LA on Sunday, August 29th; Ida’s landfall occurred exactly 16 years after the landfall of Hurricane Katrina. Although such an early estimate of insured losses is extremely difficult there is a consensus that this will be a significant event.

Indeed, Fitch Ratings said in a note on 30 August that preliminary estimates show a potential insurance industry loss from Ida in the  $15 billion to $25 billion range, which would be well below the record $65 billion in insured losses from Hurricane Katrina in 2005 but still a major loss for the market. Fitch added that Ida will likely surpass winter story Uri as the largest industry loss event in 2021. Uri, which hit swaths of the country in February, caused some $15 billion in insured losses.

The first way Ida reflects climate change is in its growth trajectory well before it made landfall. Ida exhibited what is known as “rapid intensification.” Scientists define rapid intensification — a process that historically has been rare — as an increase of 35 mph in 24 hours or less. Hurricane Ida nearly doubled that definition.

For rapid intensification to occur, warm ocean water must extend well below the surface for the hurricane to strengthen. This has led scientists to believe that storms are more likely to undergo rapid intensification as a result of warmer oceans. Indeed, as Hurricane Ida approached the Gulf Coast, it passed over a deep eddy of water that registered a temperature of almost 90 degrees.

Ida is not alone in demonstrating this pattern. As observers will be only too well aware, recent years have seen an unprecedented spate of storms that display this so-called rapid intensification phenomenon: First Irma  in 2017; then Michael  in 2018, and then last year Hurricane Laura.

“It’s not just how warm the surface temperatures are, but also the heat in the upper layers of the ocean is increasing and that is providing more energy for storms,” according to Dr Noah Diffenbaugh, Kara J Foundation Professor and Kimmelman Family Senior Fellow at Stanford University. “We are not just seeing stronger storms but rapid intensification of storms.”

Diffenbaugh says the warming ocean is triggering what would typically be a Category 1 hurricane to intensify and grow into stronger categories. Also, he suggests, whereas decades ago this would be seen as a 1 in 100 event, now we are seeing a five per cent chance of that happening, he adds.

Storms are also generating more rainfall: for every degree of warming, the atmosphere can hold 7% more water vapor that could fall as rain. After flooding from Hurricane Harvey devastated the Houston area in 2017, scientists found that human-caused climate change increased the storm’s rainfall by approximately 15%.

A 2020 study published in Nature also found that storms are staying stronger farther inland than they did five decades ago. Since hurricanes are fuelled by warm ocean water, they tend to weaken over land, but in recent years they have been raging longer after landfall. The study concluded that warmer sea surface temperatures are leading to a “slower decay” by increasing the amount of moisture that a hurricane can carry.

Temperature rises will continue until mid-century, the report adds. Without fast, deep reductions in greenhouse gases they will, over the course of the 21st century, exceed both the 1.5C and 2C limits set by countries in the Paris climate treaty.

Pandemic “a lost opportunity” for renewables transition
Scroll to top