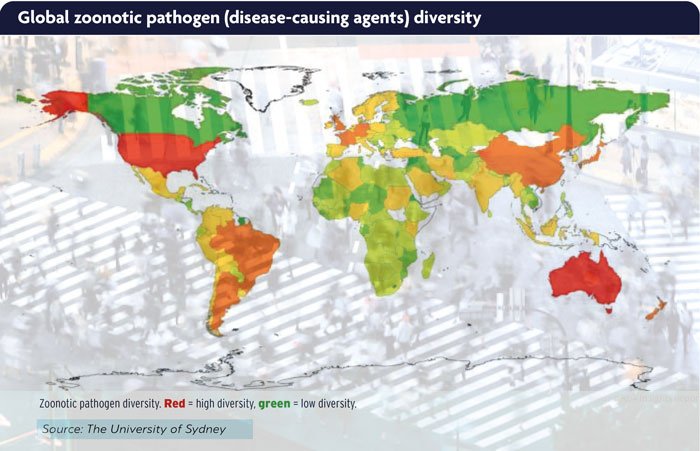 Human-caused pressure on global ecosystems is creating the ideal breeding ground for the next global pandemic.

Researchers from the University of Sydney have warned humankind is creating or exacerbating the environmental conditions that can potentially lead to further pandemics.

Modelling from the Sydney School of Veterinary Science suggests pressure on ecosystems, climate change and economic development are key factors associated with the diversification of pathogens (disease-causing agents, like viruses and bacteria). This has potential to lead to disease outbreaks.

The study said its results confirm increasing population growth and density are major drivers in the emergence of zoonotic diseases. The global human population has increased from about 1.6 billion in 1900 to about 7.8 billion today, putting pressure on ecosystems.

Associate Professor Dhand said: “As the human population increases, so does the demand for housing. To meet this demand, humans are encroaching on wild habitats. This increases interactions between wildlife, domestic animals and human beings which increases the potential for bugs to jump from animals to humans.”

“To date, such disease models have been limited, and we continue to be frustrated in understanding why diseases continue to emerge,” said Professor Ward, an infectious diseases expert. “This information can help inform disease mitigation and may prevent the next COVID-19.”

Other zoonotic diseases that have recently devastated human populations include SARS, avian (H5N1) and swine (H1N1) flu, Ebola and Nipah – a bat-borne virus.

The researchers discovered country-level factors predicting three categories of disease: zoonotic, emerging (newly discovered diseases, or those diseases that have increased in occurrence or occurred in new locations), and human.

“Countries within a longitude of -50 to -100 like Brazil, developed countries like United States and dense countries such as India were predicted to have a greater diversity of emerging diseases,” Professor Ward said.

The researchers also noted weather variables, such as temperature and rainfall, could influence the diversity of human diseases. At warmer temperatures, there tend to be more emerging pathogens.

They said the analyses demonstrated that weather variables (temperature and rainfall) have the potential to influence pathogen diversity These factors combined confirm human development – including human-influenced climate change – not only damages our environment but is responsible for the emergence of infectious diseases, such as COVID-19.

“Our analysis suggests sustainable development is not only critical to maintaining ecosystems and slowing climate change; it can inform disease control, mitigation, or prevention,” Professor Ward said. “Due to our use of national-level data, all countries could use these models to inform their public health policies and planning for future potential pandemics.”