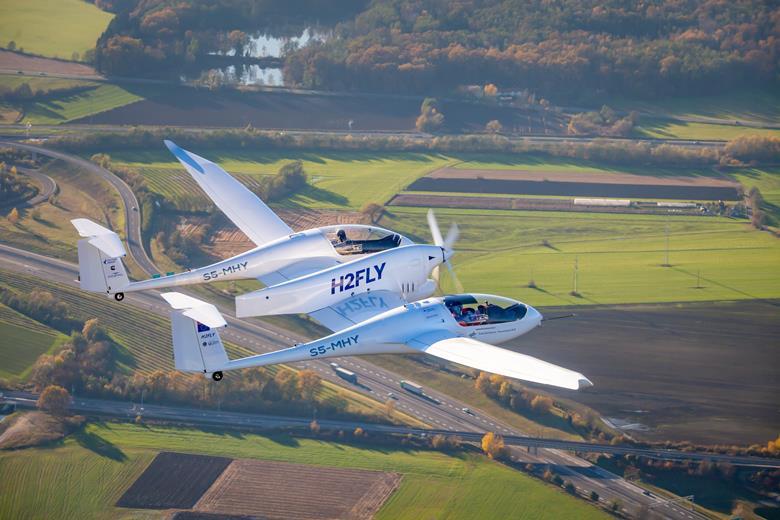 The company also claims the flight has set a new altitude record for a fuel-cell aircraft.

The Stuttgart-based company said that the plane flew 124km from Stuttgart to Freidrichshafen airport on 12 April.

“This is a remarkable achievement for H2FLY, as no other hydrogen-powered passenger aircraft has flown between two commercial airports to date,” said CEO Josef Kallo.

“We are also thrilled to have set what we believe to be a new world record by reaching an altitude of over 7,000ft with our HY4 aircraft.”

Walter Schoefer, a spokesman for the Stuttgart airport board, added: “This is another step on the long road of the aviation transformation process towards a more climate-friendly air transport. We see hydrogen-electric engines as the key to zero-emission flying.”

H2FLY, which was founded in 2015 by five engineers from the German Aerospace Centre and the University of Ulm, aims to deliver the first commercial hydrogen-electric aircraft powertrain to help “unlock the era of emission-free sustainable air travel”.

“In just a few years, hydrogen-electric aircraft will be able to transport 40 passengers over distances of up to 2,000km,” the company claims.

“H2FLY successfully closed a major funding round in April 2021, securing its growth and enabling the company to begin scaling its technology and solving the related challenges.”

It added that HY4 is laying the “foundation for development work on a hydrogen-electric-powered, 40-seat Dornier 328, which will be developed jointly with Deutsche Aircraft by 2025”.