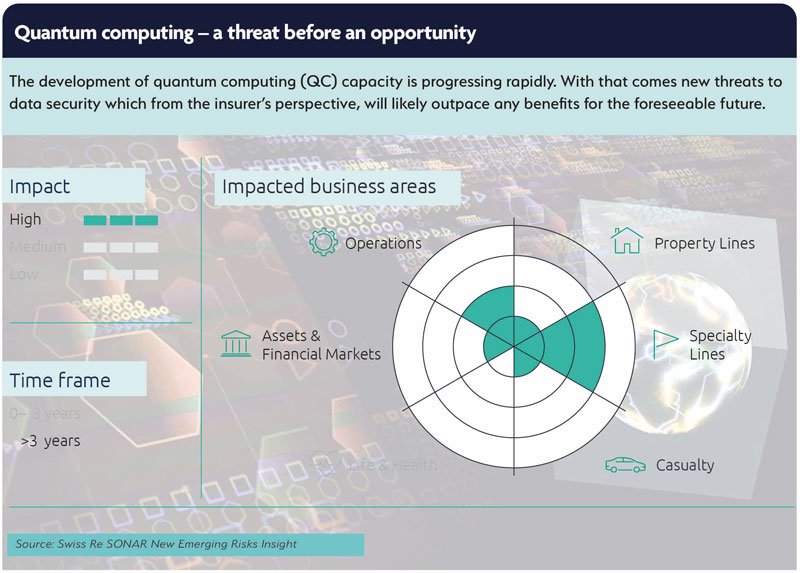 From crypto Picassos to frozen anthrax

According to Swiss Re, we live in a world where billionaires can take day trips into the stratosphere, crypto assets are challenging established financial norms and climate change is changing the very substance of our physical environment.

New risks are arising while the global community deals with known challenges such as the pandemic, war in Ukraine, economic turbulence and failing trust in established social institutions. Swiss Re’s SONAR report, now celebrating its 10th anniversary, scans the horizon for emerging risks for the insurance industry.

Patrick Raaflaub, group chief risk officer at Swiss Re, says: “A global pandemic, geopolitical conflicts, surging inflation and an unstoppable climate crisis – these are just some of the many risks that SONAR has examined over the past decade that have ultimately materialised. However, researching new risks is not about forecasting. It is about raising awareness of risks that may impact society and preparing ourselves accordingly.”

According to the reinsurer, crypto assets and quantum computing create new risks within the global financial system In the current highly technology-dependent financial system, cryptocurrencies such as Bitcoin and Ether have established themselves as potential challengers to conventional currencies. Alongside these new forms of currency, further crypto assets have emerged. Tokens, for example, allow people to buy digital representations of real assets such as art works or real estate. They can be traded and grant their owner access to assets, products or services.

Nowadays, it adds, an art lover can buy a fraction of a Picasso. The fluid ownership, taxation, regulatory issues and other risks related to the new asset classes present insurers with fresh challenges. For instance, are certain crypto assets implicitly covered by existing property or cyber policies?

The security of the new digital financial economy is also facing new risks. With quantum computing, for example, a new generation of computers is on the verge of completing tasks far beyond the reach of current machines. These hyper-smart technologies offer significant benefits: sophisticated weather modelling, advanced medical research capabilities and financial analysis. With increasing maturity, they can also become a threat to existing IT-security protocols, potentially hacking standard encryption keys used in online communications and data transfer.

Preparing for the next pandemic

Using learnings from the COVID-19 experience, Swiss Re says the world can be better positioned to respond to the next pandemic in a rapid and coordinated way. Calls to action include strengthening national healthcare systems and closing the health protection gap.

To boost resilience against future pandemics, it suggests that there needs to be renewed focus on disease and population monitoring, prevention, improving early-care services and tackling other already existing and long-standing healthcare system challenges. Rebuilding trust in doctors, healthcare and institutions is also essential.  In this context, building back better means designing services around people and their needs. Healthcare professionals need to be equipped with new skills, especially around digital health, to best respond to patients’ needs.

Swiss Re identified the threat of climate change as far back as 1979. More than 40 years later, the consequences of climate risk are very much present in our everyday lives, it adds. Beyond what we already see, climate change creates a new generation of emerging risks. This year’s SONAR report explores how the thawing of permafrost, which covers a quarter of the northern hemisphere, could not only damage infrastructure and accelerate climate hazards but also release disease-carrying pathogens that have been frozen for decades.

Agriculture is an activity that is especially susceptible to climate change – yet it is also an area that is struggling to reduce its contribution to global warming. Emissions from global food production account for about 31% of total man-made carbon emissions. The challenge for agriculture is to improve productivity and feed more people while cutting emissions at the same time. Insurers can play a vital role in faster adoption and scaling up of sustainable farming practices by offering suitable coverage solutions and facilitating climate-smart and regenerative agriculture.

10th anniversary: the benefits of preparation
There was a time when today’s big challenges such as climate change, pandemics, geopolitical conflict and inflation were themselves emerging risks. Swiss Re says that SONAR’s 10th anniversary edition is a poignant reminder of the long-term potential of emerging risks and how the insurance industry helps to build societal resilience.

The 10th anniversary full SONAR report can be found here. 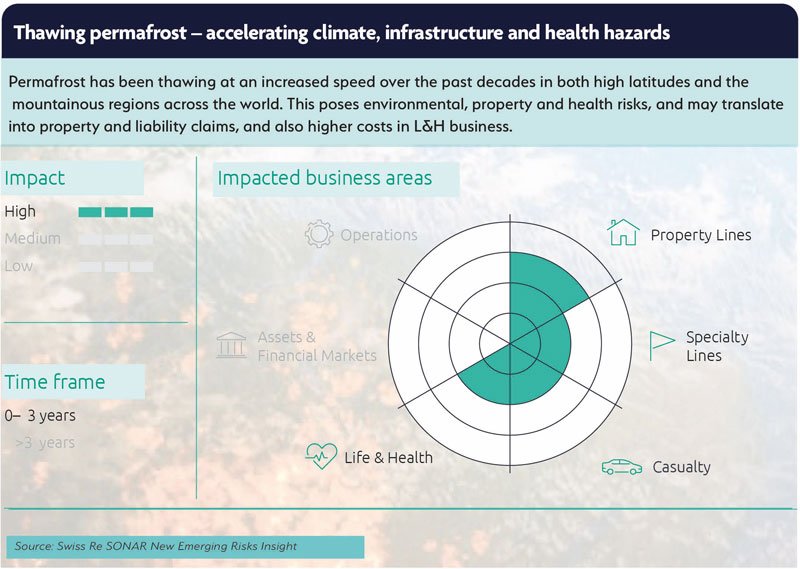 Swiss Re identified the threat of climate change as far back as 1979. More than 40 years later, the consequences of climate risk are very much present in our everyday lives, it adds. Beyond what we already see, climate change creates a new generation of emerging risks. 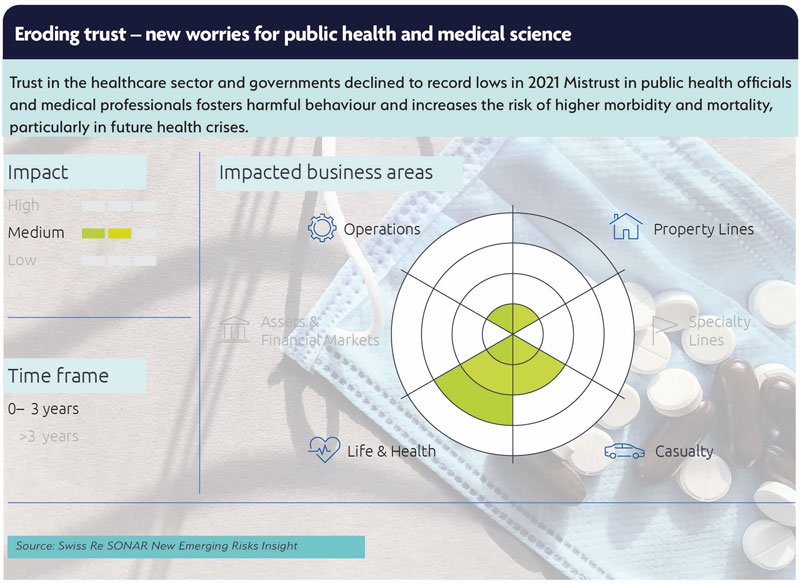