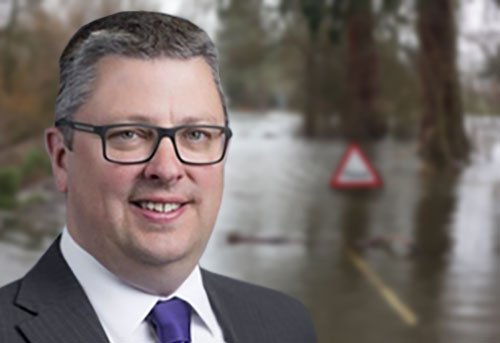 UK Flood reinsurer Flood Re has issued its annual report following a year that saw it pay out three times more money than its first three years combined.

It came as Chief Executive, Andy Bord, (pic) warned that with the COVID pandemic hitting the country’s economy investment in UK flood defences could not be reduce or funding diverted elsewhere.

After three relatively dry years, 2019/20 saw the first major Storms, Ciara and Dennis, causing widespread flooding across the UK. Between November 2019 and February 2020, thousands of homes were flooded in South Wales, Northern and Central England and the Scottish Borders.

Flood Re’s Annual Report highlights the global challenge of climate change, focusing on how rising temperatures will impact the number of properties at risk of flooding, and the implications for the Scheme’s ability to exit the market by 2039.

Today, Flood Re has also commented on how best to respond to the unprecedented circumstances caused by COVID-19. Many households impacted by flooding have endured further hardships as a result of the pandemic due to delays to building works or increased costs.

Flood Re Chief Executive, Andy Bord, emphasised the critical need for any COVID-19 recovery plan to ‘build back better’ and for continued and sustained investment in flood-risk management strategies.

“Flood Re has had a significant impact on the affordability and availability of home insurance with more than 300,000 households in the UK who are at risk of flooding directly benefitting from the Scheme,” he explained. “We are helping more families than ever before and are in a strong financial position ready to support those impacted by flooding.

“This year has been significant in many ways. We have seen the first major flooding events since our launch in 2016 as well as having to adapt to the COVID-19 pandemic. In these unprecedented times, the country must build back better, developing a recovery plan that creates sustainable and resilient foundations for the future.

“For those at risk of flooding, it is critical that investment in flood mitigation strategies be maintained.”