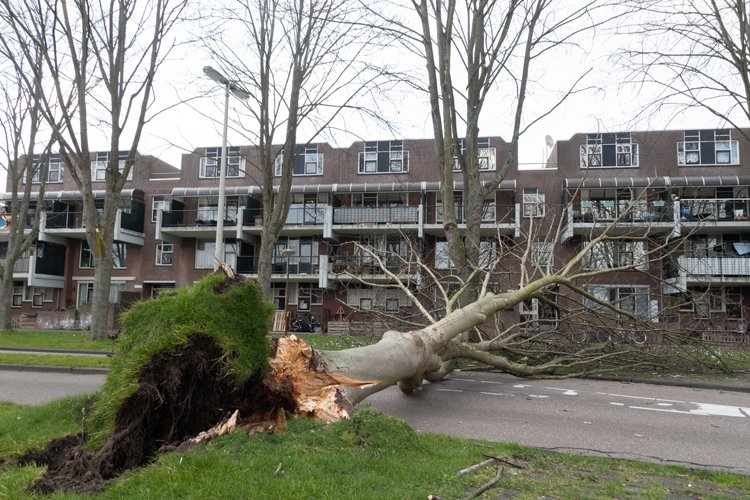 Insured loss estimates from European windstorms Dudley and Eunice are now suggesting one of the most severe series of loss events to hit the market.

Insured losses from Winter Storms Dudley/Ylenia and Eunice/Zeynep will fall somewhere between €3bn and €5bn, according to Verisk Extreme Event Solutions, with the majority of expected to be within Germany, the UK, and the Netherlands.

According to the company, the industry loss estimates also reflect an adjustment to account for increased material and other repair costs of some 10-15% in the current construction market.

Dr Marc Marcella, principal scientist at Verisk, said: “In the wake of Dudley/Ylenia, Storm Eunice/Zeynep brought more high winds, leading to widespread reports of wind damage to homes and businesses in the UK and continental Europe, including roofs torn off. In addition, the roofs of an arena in London and another in the Hague were damaged severely.”

He added: “Extreme wind speeds in London are relatively rare. Transportation of all types, including hundreds of domestic and international flights and rail, and road travel, was disrupted in the UK and continental Europe.”

According to RMS, insured losses from the two storms will likely fall between EUR3 billion and EUR4.5 billion.

It added that losses in Germany will likely account for around 40 percent of the total loss, followed by the Netherlands at around 20 percent, and the United Kingdom at around 15 percent.

RMS analysis suggests that Eunice is expected to contribute between EUR2.5 billion and EUR3.5 billion to the overall insured loss total.

This estimate would rank Eunice as the most damaging European windstorm event since Kyrill in 2007.

RMS said that losses caused by storm surge and inland flooding are not included in these estimates, as these are not expected to be material for Dudley and Eunice. Some flooding has occurred subsequently in Europe resulting from Windstorm Franklin between February 20-22, 2022.

It said that the loss estimates consider unique aspects of these events, including market dynamics and economic effects from the ongoing COVID-19 pandemic, which will likely act to increase losses beyond typical expectations. This includes losses to large facilities, such as power plants and stadiums, and uncertainty in replacement costs, driven by material prices and shortages.

The estimates also consider a marginal amount of post-event loss amplification and the possibility of claims leakage, the payment for damage from other events under a single occurrence, given that several events occurred in close succession. This includes Storm Franklin, which impacted Europe to a smaller degree between February 20-22, 2022 but its damage may be reimbursed under Dudley or Eunice claims.

Michèle Lai, senior product manager for Europe Climate Models at RMS, said: “Windstorm Eunice will likely be the costliest European windstorm of the last 15 years, following the path of Kyrill (2007), however, it will end up causing less damage in Germany than its ‘big brother.’ “

“Although the last two decades have mostly spared us from history-making windstorms like Daria (1990) or Lothar (1999), Windstorms Dudley and Eunice remind us how destructive these events can be and highlight the importance of storm clustering, the close succession of multiple storms following similar trajectories, in Europe.”