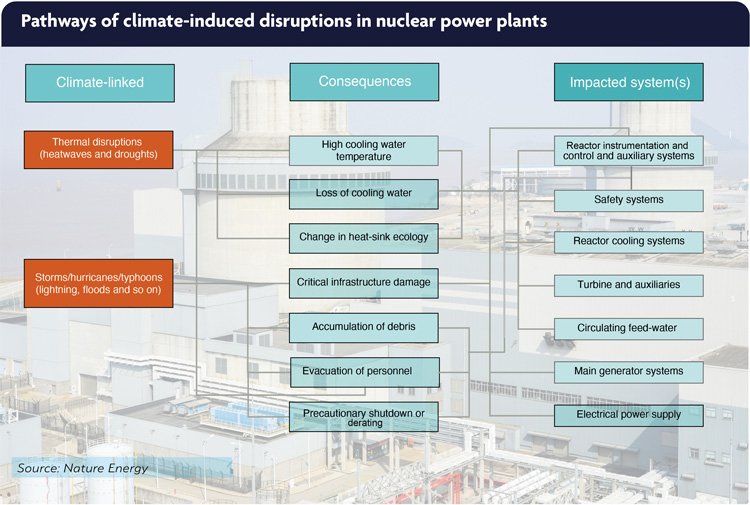 Disturbing recent analysis from the John F Kennedy School of Government at Harvard University suggests the extent to which typhoon and hurricane activity puts nuclear plants at risk.

According to the paper, published in Nature, hurricanes and typhoons have become the leading causes of nuclear outages, at least in North America and South and East Asia.

The analysis calculates that the frequency of climate-related nuclear plant outages is almost eight times higher than it was in the 1990s. The analysis also estimates that the global nuclear fleet will lose up to 1.4 percent—about 36 TWh—of its energy production in the next 40 years and up to 2.4 percent, or 61 TWh, by 2081-2100.

The author analysed publicly available databases from the International Atomic Energy Agency to identify all climate-linked shutdowns (partial and complete) of the world’s 408 operational reactors. Unplanned outages are generally very well documented, and available data made it possible to calculate trends in the frequency of outages that were linked to environmental causes over the past 30 years.

The author also used more detailed data from the last decade (2010–2019) to provide one of the first analyses of which types of climate events have had the most impact on nuclear power. Although the report doesn’t directly link the reported events to climate change, the findings nonetheless suggest an overall increase in the number of outages due to a range of climate events.

The two main categories of climate disruptions are broken-down into thermal disruptions (heat, drought, and wildfire) and storms (including hurricanes, typhoons, lightning, and flooding). In the case of heat and drought, the main problem is the lack of cool-enough water—or in the case of drought, enough water at all—to cool the reactor.

However, there were also a number of outages as a result of ecological responses to warmer weather: for example, larger than usual jellyfish populations have blocked the intake pipes on some reactors.

Storms and wildfires have also caused a range of problems, including structural damage, precautionary pre-emptive shutdowns, reduced operations, and employee evacuations. From 2010 to 2019, the leading causes of outages were hurricanes and typhoons in most parts of the world, although heat was still the leading factor in Western Europe (France in particular).

While these represented the most frequent causes, the analysis suggests that droughts were the source of the longest disruptions and thus the largest power losses. Indeed, the author calculated that the average frequency of climate-linked outages went from 0.2 outages per year in the 1990s to 1.5 outages in the timeframe of 2010 to 2019. A retrospective analysis further showed that, for every 1° C rise in temperature (above the average temperature between 1951 and 1980), the energy output of the global fleet fell about 0.5 percent.

This analysis suggests that climate-associated outages have become the leading cause of disruptions to nuclear power production—other causes of outages have only increased 50 percent in the same timeframe. Projecting into the future, the author calculates that, if no mitigation measures are put into place, the disruptions will continue to increase through the rest of this century.

The findings have potentially profound implications, according to the report:

“In a climate-constrained world, the reported findings can have important policy implications,” it says. “Governments and policymakers will have to conduct more comprehensive risk assessments of new nuclear power plants that cover the full spectrum of projected extreme weather conditions as the climate changes, reinforcing a previous call to have a systematic and integrated risk assessment approach in which international agencies play a major role as well.”

This will be particularly relevant for selecting sites for future plants, it adds, noting that for existing nuclear assets, power utilities could optimise their planned outages around time periods of highest probability of climate-linked disruptions to minimize their economic impact. Such evaluations, it says, will require spatial examination of concerned contexts that is more refined than just a country-level analysis.

On a positive note, it says that current and future nuclear power plants  can adapt to climate change effects:

“The adaptation mechanisms will have to be context, technology and region specific and based on studying the likelihood of specific weather conditions that are relevant to the concerned regions where existing and new NPPs are located. Prediction models of extreme weather conditions need to be incorporated in assessing the risk of nuclear power assets, particularly in climate-vulnerable contexts and regions.”

“Based on the monthly and regional distributions of outages… reactor outages such as those used for refuelling can be aligned with months of increased probability of climate-linked outages. For example, in the case of France, the months of September, October and November would overlap with lower river water levels.” 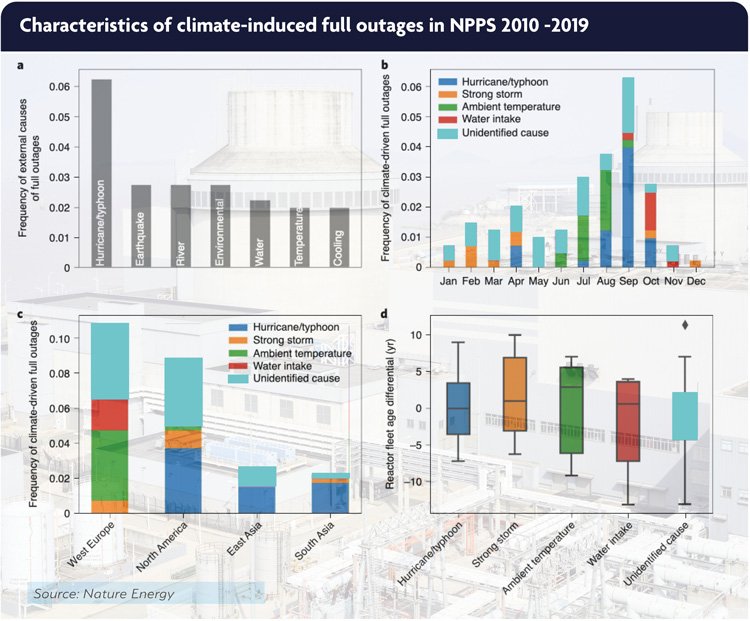 This analysis suggests that climate-associated outages have become the leading cause of disruptions to nuclear power production—other causes of outages have only increased 50 percent in the same timeframe.