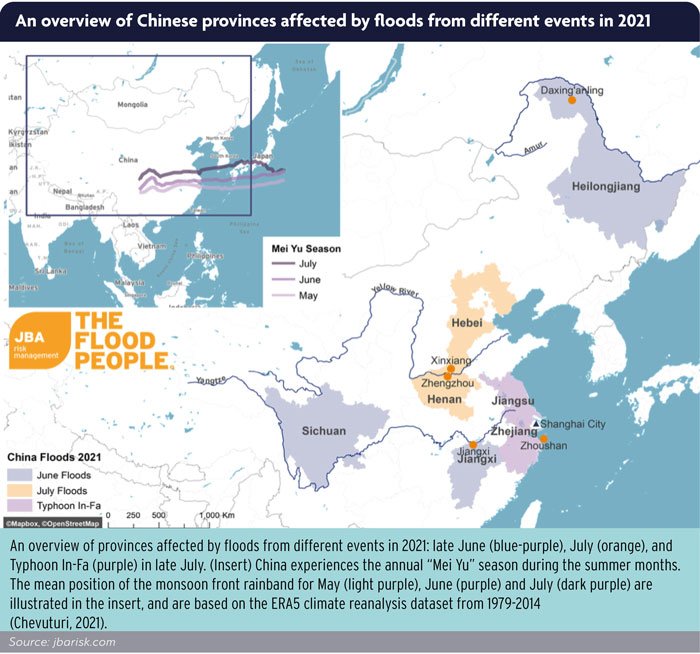 In a report, JBA said the floods started in late June in the provinces of Sichuan, Jiangxi and Heilongjiang, following successive occurrences of heavy rainfall.

This was followed by unprecedented rainfall in July as flooding occurred in Henan province.

The largest rainfall event observed in Zhengzhou city, located in Henan province, has been classified as a 1-in-1,000-year flood, making it one of the worst events to affect China this year.

The severe floods in July were attributed to the prolonged rainfall deposited in a short period of time across widespread areas.

Next, Typhoon In-Fa made landfall on the Zhoushan Archipelago in Zhejiang Province, on the central coast of eastern China, on 25 July at 12:30pm (local time) with the centre of the storm being 40km south of Shanghai. Maximum sustained winds of 74 km/h (tropical storm) were recorded.

As of 2 August 2021, 302 deaths were officially reported. Economic losses for Henan alone are likely to reach at least $13.79 billion.

JBA’s report added that, according to rainfall gauges, several locations in Henan province experienced 120-400% more rainfall in just 24 hours than the historical average for the whole month of July.

The city of Zhengzhou was particularly hit, recording a maximum of 617mm of rain in a 24-hour period – equivalent to its average rainfall for an entire year.