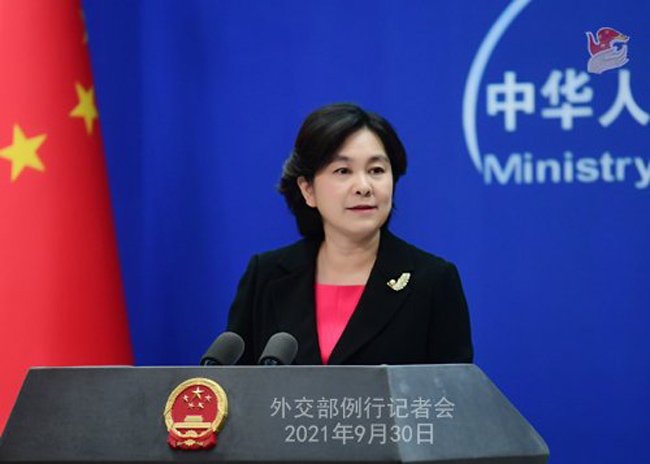 One of China’s leading officials has warned the US, UK and Australian defence agreement poses serious issues for the world around nuclear proliferation and threatens to reignite tensions in the region.

Speaking to the media, China’s foreign ministry spokesperson Hua Chunying (above) was asked to comment on reports that the US ambassador to Indonesia, has stated that the alliance between the three nations would not prompt an arms race or drive nuclear proliferation.

“We have noticed the reports you mentioned,” she replied. “In fact, for days, different parties of the international community have expressed concerns and worries about the nuclear submarine cooperation among the US, the UK and Australia. I wonder where the confidence in the remarks of the US Ambassador to Indonesia came from and on what basis.

“In fact, Russian Deputy Foreign Minister Sergey Ryabkov said the other day that Russia has raised a range of questions concerning the AUKUS establishment to the US side, which include whether the nuclear submarine cooperation correlates with international non-proliferation requirements.”

Hua warned China feared the consequences of the pact which would provide weapons grade uranium to a country which is not a nuclear power.

“China believes that the nuclear submarine cooperation among the US, the UK and Australia creates serious nuclear proliferation risks, clearly violates the spirit of the Treaty on Non-Proliferation of Nuclear Weapons (NPT). It will not only have a far-reaching impact on the international non-proliferation system, but also bring real threats to regional peace and stability,” she explained.

Hua added the comments from the Russian Deputy Foreign Minister Ryabkov reflected the common concerns of the international community, adding that the US, UK and Australia should treat those concerns seriously.

Hua explained if all countries were to turn a blind eye to rules and conduct nuclear proliferation activities without restrictions as the US, the UK and Australia did, then where is the authority and the meaning of existence of the NPT and international non-proliferation system?

Amid rising fears that the issue may impact global trade, with China’s role as one of the world biggest exporter and importer of goods, Hua warned the pact could only heighten tensions in the region.

“I also want to stress that AUKUS, like Quad, subverts to and serves the Indo-Pacific strategy with US dominance,” she said. “It seeks to start things anew in the region and is a move against the trend of the times.

“Regional countries and the international community should stay wary of and be opposed to this.”