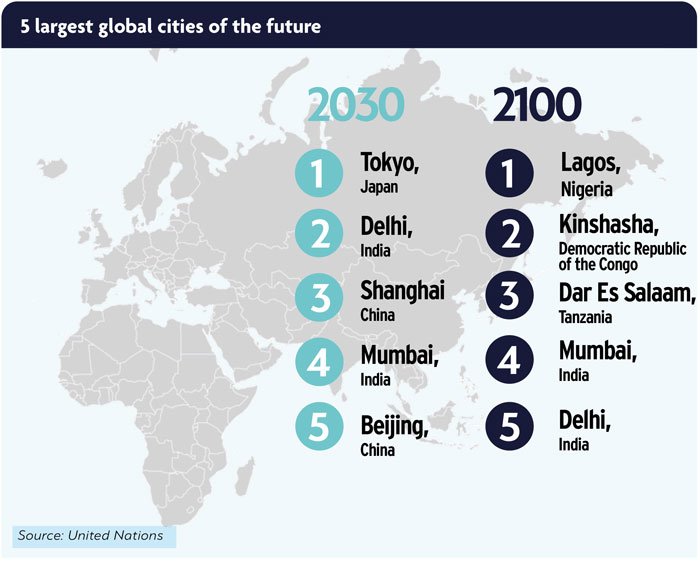 The shifting global population and growth of cities are two major trends identified by Aon as part of its analysis of the most important macrotrends which will shape business over the coming decades.

Understanding the trends that will reshape business is the key to preparing them to not only remain viable in the future but also to maximize opportunities that lie ahead, according to Bryon Ehrhart, global head of strategic growth and development at the broker.

He was speaking as part of the Aon Insights Series London.

“It’s easy to say: ‘well, we earn most our profits in North America today, some in Western Europe,’ ” said Ehrhart. “But that’s not the world you’re going to have to succeed in over the next 20 to 50 years. You’re going to have to make ground-breaking investments in markets that are going to grow while the other ones shrink.”

Increased urbanization is another global trend to note, according to Aon. While 55 percent of the world’s population lives in cities in 2020, that figure is expected to reach 67 percent in 2100.

While the five largest cities in 2030 are projected to be Tokyo; Delhi, India; Shanghai; Mumbai, India; and Beijing, by 2050 the list will likely read Lagos, Nigeria; Kinshasa, Congo; Dar es Salaam, Tanzania; Mumbai; and Delhi.

With that increase in urbanisation, there will be growing problems that will need to be addressed and risks that need to be managed such as waste management and disease outbreaks.

Another key trend identified by Aon is the growing importance of intellectual property.  Since information technology took off in the 1980s, the value of intangible assets has skyrocketed, noted Ehrhart.

The current value of U.S. intangible assets is $20 trillion to 25 trillion, or roughly 85 percent of the total value of the S&P 500. While this rapid increase in value comes with greater risk, it also brings new opportunities to leverage this value, such as monetizing IP or accessing IP-based lending alternatives to assist in capital-raising efforts.

“Intellectual property risk is no longer just about being sued for infringement,” added Brian Hinman, chief commercial officer of Intellectual Property Solutions at Aon. “It’s about identifying what are a particular business’s value-producing assets and understanding the various threats to them.” 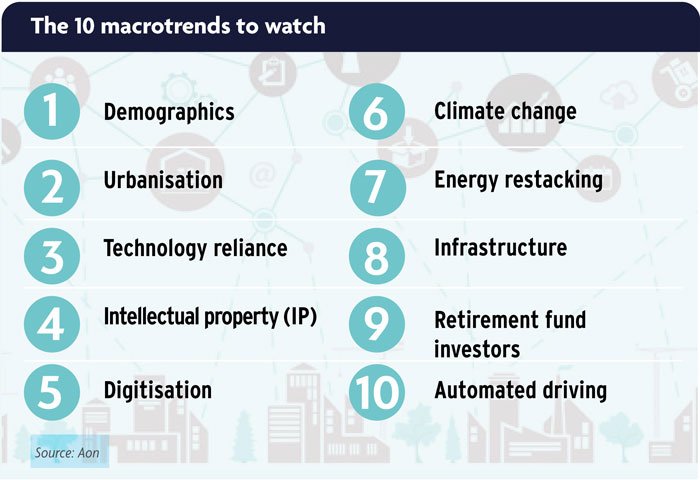