With many areas of Southern California already experiencing drought conditions, concerns are mounting that communities and businesses will need to implement extensive and unprecedented cutbacks on water usage this summer – with further potential hits to agricultural insurers.

Indeed, insurance payments to US farmers for crops lost to droughts and flooding have risen more than threefold over the past 25 years, according to a recent analysis of federal data by the Environmental Working Group.

The US federal government pays about 60% of the nation’s crop insurance premiums through taxpayer subsidies, according to the Congressional Budget Office.

Insurance payments to farmers due to drought rose more than 400% between 1995 and 2020 to $1.65 billion, according to publicly available data from the US Department of Agriculture.

According to California Drought Action, this is the state’s second extreme drought in 10 years, a symptom of a warming climate.

It said that January, February, and March had the least rain and snow on record for any of these months in the state, adding that these warm, dry months overshadowed gains in precipitation at the end of 2021. Snow melted faster than expected, reducing snowpack to just 38% of average by 1 April.

Last week, the water authority declared the emergency for areas that rely on the State Water Project, a system of canals, reservoirs, and pipelines that covers roughly two-thirds the length of the state, affecting about 6 million southern Californians in Los Angeles, San Bernardino and Ventura counties.

“The reality is, this drought has left us without the water supply we need to meet normal demands in these areas,” said Adel Hagekhalil, MWD general manager in a statement. “To make sure we have enough water for their basic human health and safety needs, everyone in these communities must immediately and dramatically reduce their water use.”

Describing the drought as “one of the most alarming challenges our region has ever faced” the MWD issued unprecedented restrictions limiting outdoor watering to one day per week.

It has also called on all southern Californians to restrict their use by up to 30%.

If conservation efforts fail to fall in line with declining supplies by September, the rules could be tightened with an all-out ban on outdoor watering, it added.

MWD will not directly impose the restrictions on consumers, but rather require its member agencies that are receiving State Water Project (SWP) supplies to enforce the watering limits.

Specifics on which day of week watering will be allowed and enforcement protocols will be determined by each member agency, MWD added, noting that water agencies in the SWP-dependent areas also could select an alternative path that sets volumetric limits on the amount of water used. Agencies that don’t enforce the one-day-a-week watering restrictions or exceed their volumetric limits would face financial penalties from the MWD..

The looming water crisis has been caused by changing climate conditions.

In California, snow typically builds up in the Sierra Nevada mountians throughout the winter, storing water that gradually melts through the spring and early summer and replenishes reservoirs.

In a normal year, snow melt would provide 30% of the state’s water, according to the Department of Water Resources. However, this is not a normal year. By April, at the end of this year’s wet season, California’s snowpack was only 4% of normal, and by this month there was no snow at all. 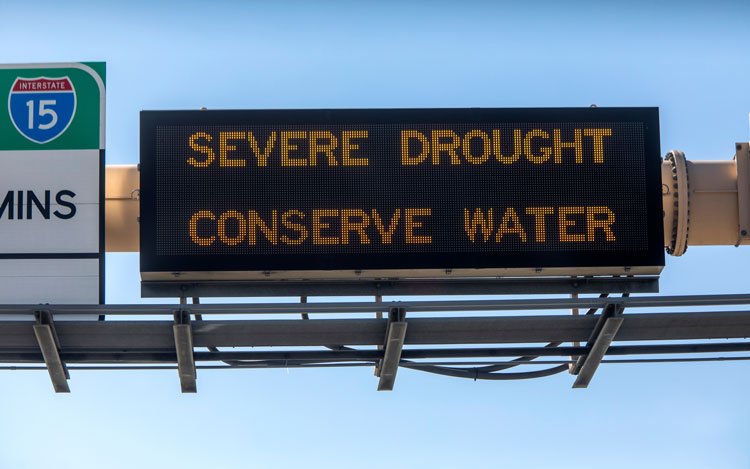 According to California Drought Action, this is the state’s second extreme drought in 10 years, a symptom of a warming climate.