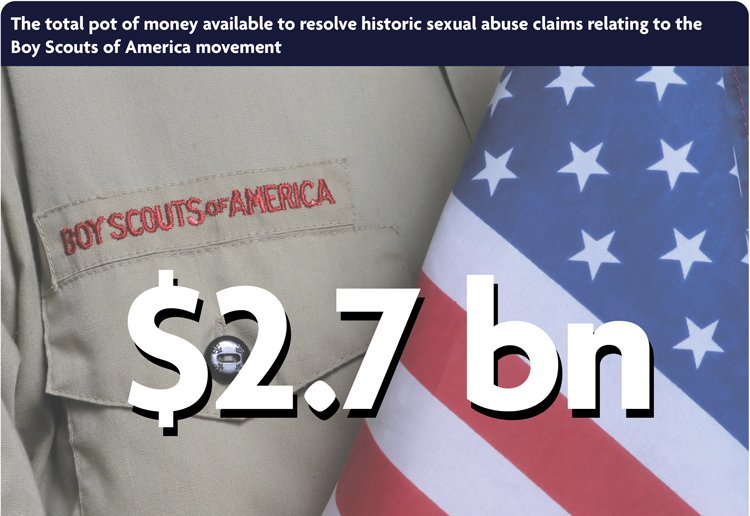 The power of the US plaintiff lobby was made apparent once again this week with the total pot of money available to resolve historic sexual abuse claims relating to the Boy Scouts of America movement climbing towards a hefty $3 billion.

One of the Boy Scouts of America’s primary insurers, Chubb unit Century Indemnity Company, said it will contribute $800 million to a deal proposed by the youth organisation to settle around 82,500 claims from people who claim they were sexually abused as children by troop leaders.

The latest settlement beings the total claims pot agreement to some $2.7 billion.

In a statement, Chubb said: “As reported by the Boy Scouts of America (BSA) and other parties today [13 December], an agreement-in-principle has been reached in the BSA bankruptcy. Under this agreement, assuming approval, Century Indemnity Company and other Chubb companies will pay $800 million and obtain a broad release for all Chubb companies from BSA-related abuse claims.”

“The net financial impact to the company from the settlement will be substantially reduced by carried reserves and third-party reinsurance. This agreement-in-principle is contingent on a variety of conditions and court approvals.”

Founded in 1910, the Boy Scouts filed for Chapter 11 bankruptcy protection in February 2020 after being hit with a flood of sexual abuse lawsuits.

The Boy Scouts of America, based in Irving, Texas, sought the bankruptcy protection at the time in a bid to halt hundreds of lawsuits and create a compensation fund for men who were allegedly molested as youngsters decades ago by scoutmasters or other leaders.

In total, the Boy Scouts of America movement faces 82,500 claims of sexual abuse in the bankruptcy.

Under the organisation’s proposal, those who filed claims in the ongoing bankruptcy proceeding will receive settlements according to the severity of their cases and when the alleged abuse occurred.

The case is being heard by US bankruptcy Judge Laurie Selber Silverstein and the latest agreement has, it will surprise no-one familiar with the US judicial system to learn, come after hours of often brutal legal arguments from both sides, with questions raised in the US media over the size of some of the legal fees, reportedly as high as $1000 an hour in some instances. Indeed, Century’s contribution comes after more than a year of back-and-forth arguments between the insurer and the Boy Scouts of America.

During the bankruptcy proceedings, Century had vigorously questioned the legitimacy of some of the claims, arguing that the Boy Scouts of America movement was trying to push through a speedy plan process while leaving out key information for creditors to vote on the plan, including how much local councils would contribute to the settlement of more than 80,000 sex abuse claims.

Yet those on the claimant side have also voiced their concerns with the proposed settlements.

Under the new Boy Scouts of America plan, claimants could receive as little as $3,5000 for abuse that did not involve physical contact to a maximum of $2.7 million for the most severe cases, according to court papers. The amount the claimants receive will also depend in part on where in the US the abuse occurred, among other criteria.

Evan Smola, a partner at Hurley McKenna & Mertz, which represents 4,000 victims, has said that the current estimates of survivor pay-outs pales in comparison to those of other recent sex abuse cases, including the University of Southern California and Michigan State University, which provided pay-outs well into six-figure amounts, and sometimes over $1 million, per survivor.

“This is an extremely important step forward in the BSA’s efforts to equitably compensate survivors, and our hope is that this will lead to further settlement agreements from other parties,” the Boy Scouts of America said in a statement this week.

The deal, which is subject to court approval, is also backed by the Boy Scouts’ other primary insurer, The Hartford Financial Group, and the Church of Jesus Christ of Latter-day Saints, which previously chartered Scouting groups and activities.

Indeed, this autumn saw further significant financial agreements in the case. In September the Boy Scouts of America secured more than $1 billion in the settlements to resolve sex abuse claims, with $787 million coming from The Hartford and another $250 million from the Church of Jesus Christ of Latter-day Saints.

The September agreement replaced the Boy Scouts’ prior deal with The Hartford, under which the insurer said it would contribute $650 million to a proposed trust fund for victims of child sexual abuse as part of the Boy Scouts’ bankruptcy case.

The Church of Jesus Christ of Latter-day Saints, meanwhile, is one of many organisations that fund scouting activities and troops.

Earlier this year, meanwhile, Silverstein approved the Boy Scouts’ $850 million settlement with representatives of around 70,000 abuse claimants. That deal is backed by 250 local councils.

The Boy Scouts of America movement has stressed that it is committed to fulfilling its “social and moral responsibility to equitably compensate survivors”.