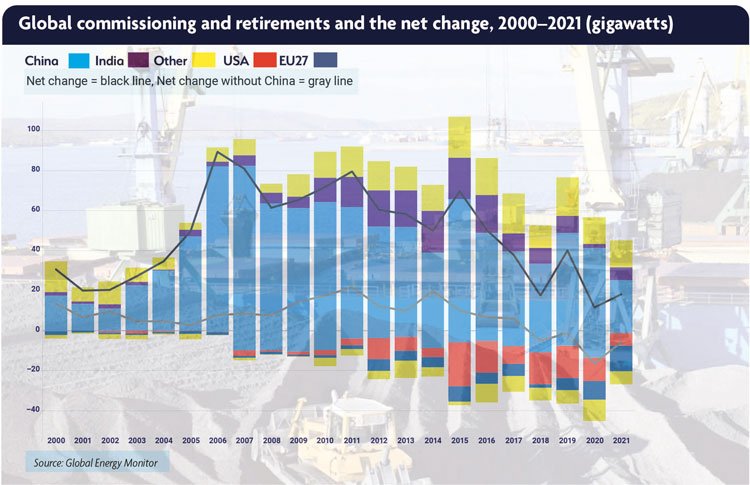 The global capacity of power plants fired by coal rose last year as the world recovered from the COVID-19 pandemic, according to a major new research report by respected US environmental group Global Energy Monitor.

The world has more than more than 2,400 coal-fired power plants operating in 79 countries, for a total of nearly 2,100 gigawatts (GW) of capacity, according to the report. An additional 176 GW of coal capacity is under construction at more than 189 plants, and 280 GW is planned at 296 plants. It says that the directive for a fighting chance at a liveable climate is clear—stop building new coal plants and retire existing ones in the developed world by 2030, and the rest of the world soon after, according to studies by the Intergovernmental Panel on Climate Change (IPCC) and International Energy Agency (IEA), among others.

According to the report, a long line of coal dominoes fell in 2021. COP26, the biggest climate change summit of the last five years, concluded in Glasgow in November 2021:

“The summit’s coal outcomes did not involve any timelines nor consensus for a total coal phase-out. Nonetheless, if fully implemented, the commitments made in the run-up to and during the summit mark a breakthrough in the global effort to phase out coal and reduce power sector emissions. The number of coal plants effectively given a close-by date nearly doubled to 750 coal plants (550 GW). Only 170 plants (89 GW), or 5% of the operating fleet today, are not covered by a phase-out date or carbon neutrality target. Still, few of these plants are scheduled to retire on the timelines required by the Paris climate agreement.”

“Despite progress at COP26, coal’s last gasp is not yet in sight. In 2021, the operating coal fleet grew by 18.2 GW, a post-COVID rebound in a year that saw a slowdown in coal plant retirements. China continued to be the glaring exception to the ongoing global decline in coal plant development. At a time when developed countries should be helping the rest of the world both end new coal plant construction and begin their coal transitions in earnest, many are instead planning to operate their coal plants at home far beyond the deadlines required by climate science and are clinging on to the false promise of ‘clean coal’ technologies.”

“In addition, the amount of electricity generated from coal rose by 9% in 2021 to a record high, more than rebounding from a 4% fall in 2020 when COVID first struck. Both the global coal capacity increase and the record rise in coal power generation in 2021 crystallise how important the agreement at Glasgow to phase-down coal was— and how far many key players have to go.”

The above is a summary of the main findings of the report. To read the full report, click here. 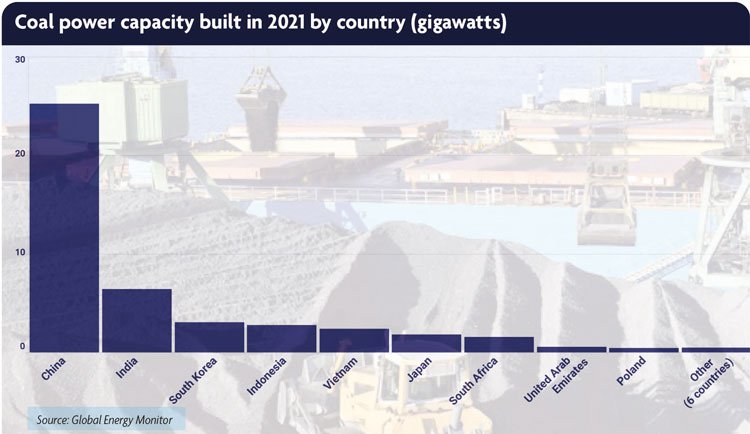 The number of coal plants effectively given a close-by date nearly doubled to 750 coal plants (550 GW). Only 170 plants (89 GW), or 5% of the operating fleet today, are not covered by a phase-out date or carbon neutrality target.