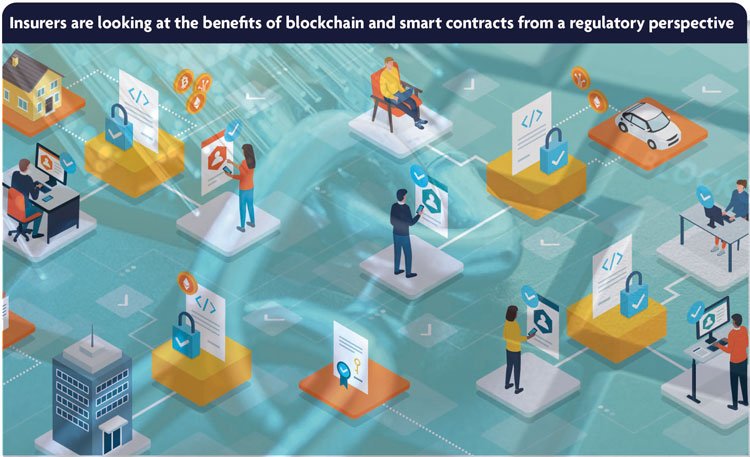 Last year, the European Insurance and Occupational Pensions Authority (EIOPA) launched a public consultation on a “Discussion paper on blockchain and smart contracts in insurance” with the aim of providing a high-level overview of risks and benefits of blockchain and smart contracts in insurance from a supervisory perspective, as well as to gather feedback from stakeholders.

Having analysed the responses, EIOPA noted that insurers see potential in blockchain and are exploring possible use cases across the insurance value chain to streamline business and better serve customers.

It added that the technology’s deployment in the European insurance sector, including concerning crypto assets, is still at an early stage. Most use cases cited by stakeholders are still small-scale, while other projects are in a proof-of-concept (PoC) stage.

On one hand, respondents largely agree with the opportunities and risks presented in EIOPA’s discussion paper, mentioning the potential benefits of blockchain in speeding up transactions and claims handling, lowering operational costs and improving traceability.

On the other hand, they share the view that risks in cyber and operational IT areas include the inadequate training of staff, encryption security issues as well as risks arising from incorrect coding. Stakeholders also referred to sustainability concerns, given the high energy consumption of some blockchain solutions.

Stakeholders also agreed that there is potential for blockchain to be used in supervisory and regulatory processes and highlighted that efforts should focus on lowering costs and reducing procedural burdens for both the industry and supervisors.

As next steps, EIOPA said it will reflect further upon the barriers and challenges highlighted in the consultation and continue assessing the use of blockchain in supervisory and regulatory processes as necessary. It added that it is of utmost importance to keep an open dialogue with all stakeholders.

Stakeholders noted insurers across the EU and beyond are currently developing blockchain and smart contract use cases across the insurance value chain to explore its potential to streamline business operations and to better serve consumers.

However, blockchain and smart contract deployment in the EU seems to be still in the early stages, according to EIPOA’s feedback. Many of the use cases are still small scale or in proof of concept (PoC) state. The feedback also indicated that often companies conduct PoCs to understand blockchain better and to build the required skills.

Overall initial feedback based on PoC and use cases in the insurance sector seems to be positive and demonstrates blockchain´s potential as a technology that could benefit both customers and the industry.

On the other hand, one stakeholder noted there seems to be few things blockchain can currently do better or more cost effective than other existing technologies. In his opinion, light adoption is expected in the mid-term, focused on niche players, products and business models.

EIOPA also noted that use cases in industrial and transport insurance market seems to be more widespread than use cases for retail consumers.

As potential uses, it added, stakeholders stated blockchain could reduce fraud, enable insurers, reinsurers, intermediaries and regulators to share data securely and in real time and give customers more control over their data, including access rights.

Specifically, several following potential applications were mentioned in the feedback, including the following:

Most of the stakeholders agreed with the risks of Blockchain and smart contracts identified in the consultation paper, although it was highlighted that the risks would differ depending on the concrete use case and the contexts in which they are applied. It was also emphasized the importance of adequately training staff on IT and digitalization issues to reduce compliance risks and enable them to provide adequate information and advice to consumers.

Cyber and operational IT risks were frequently mentioned by stakeholders, for instance as a result of an unauthorised access to the chain or the erroneous duplication of the chain. Indeed, protecting against potential errors in the code was seen as a key priority, given that in Blockchain and smart contracts “the code is law”.

The development of robust and trustworthy digital identity systems was recognised by stakeholders as a key enabler for reliable Blockchain and smart contracts in insurance.

Finally, specific reference was also made to the importance of carefully assessing the risks of Decentralised Autonomous Insurers (e.g. decentralised peer-to-peer insurance), for instance concerning possible liability or redress shortcomings that could arise from them. In this regard, some stakeholders considered that these entities should be included in the regulatory perimeter following an activity-based approach to regulation so as to ensure a level playing field and enhance consumer protection.

The full EIOPA discussion paper can be accessed via this link.

Blockchain and smart contract deployment in the EU seems to be still in the early stages, according to EIPOA’s feedback. Many of the use cases are still small scale or in proof of concept (PoC) state. The feedback also indicated that often companies conduct PoCs to understand blockchain better and to build the required skills.