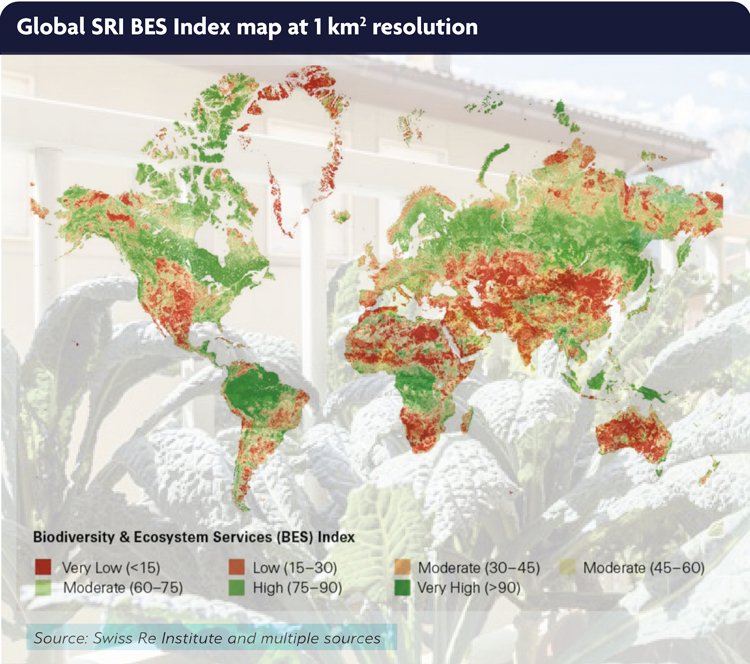 Biodiversity threat critical for 20% of the world warns reinsurer

The world has been warned that it cannot afford to ignore the threat to global biodiversity.

The Swiss Re Institute has issued its new Biodiversity and Ecosystem Services Index, which warns that a fifth of the world’s nations are in danger of ecosystem collapse, with the results that increases areas of the planet will no long be able to sustain life of any kind.

Oliver Schelske, Swiss Re Institute Natural Assets & ESG Research Lead: “If humanity loses the natural environment as the foundation for life, evolution, food, shelter, medical supply, cultural and religious inspiration, what is left? We would live in a world even more impacted by extreme weather, loss of livelihood and food scarcity, as well as having a less resilient global economy. We can work together against the loss of nature – for example, by enabling coral reef or mangrove protection or by investing in green or ecological infrastructures.”

The report which accompanied the release of the index found:

“Countries across the world are reliant on a range of services that are based around their natural ecosystems,” stayed the report. “Biodiversity and Ecosystem Services (BES) include such necessities as food provision, water security and regulation of air quality that are vital to maintaining the health and stability of communities and economies.”

Over half (55%) of global GDP, equal to USD 41.7 trillion, is dependent on high-functioning biodiversity and ecosystem services. The study found that both developing and advanced economies are at risk.

An upcoming United Nations Summit on biodiversity on 30 September 2020 is set to call for “urgent action on biodiversity for sustainable development” as global efforts to improve in this vital area have fallen well below UN targets to halt biodiversity loss.

Swiss Re said it had developed the BES Index to build understanding around the issue.

Christian Mumenthaler, Swiss Re’s Group Chief Executive Officer, said: “There is a clear need to assess the state of ecosystems so that the global community can minimise further negative impact on economies across the world. This important piece of work provides a data-driven foundation for understanding the economic risks of deteriorating biodiversity and ecosystems. In turn, we can inform governmental decision-making to help improve ecosystem restoration and preservation. We can also support corporations and investors as they fortify themselves against environmental shocks. Armed with this information, we can also ensure the provision of stronger insurance services.”

“Major economies in Southeast Asia, Europe and America that already have diversified economies are nevertheless also exposed to risk from BES decline,” added the study. “This is because important individual economic sectors can be impacted by single BES factors such as water scarcity, which can have a disruptive effect on a country’s manufacturing sectors, properties and supply chains.”

The report said by tackling BES challenges through simple preservation actions can have significant impacts. For example, ecosystem restoration along the coast of Louisiana could reduce expected flood costs by US$ 5.3 billion annually. Steps to ensure functioning coral reefs globally could lower estimated flood damages for 100-year storm events that would otherwise increase by 91% across the globe.

Christoph Nabholz, Swiss Re’s Chief Research Officer added: “Biodiversity is an increasingly pressing topic for governments and industry around the world. Climate change and biodiversity loss are twin challenges that not only pose an environmental risk – they affect how countries function and impact their economies. Urgent action is needed to protect Earth’s biodiversity and strengthen societal and climate resilience as a substantial number of countries are more and more at risk of being disrupted.”