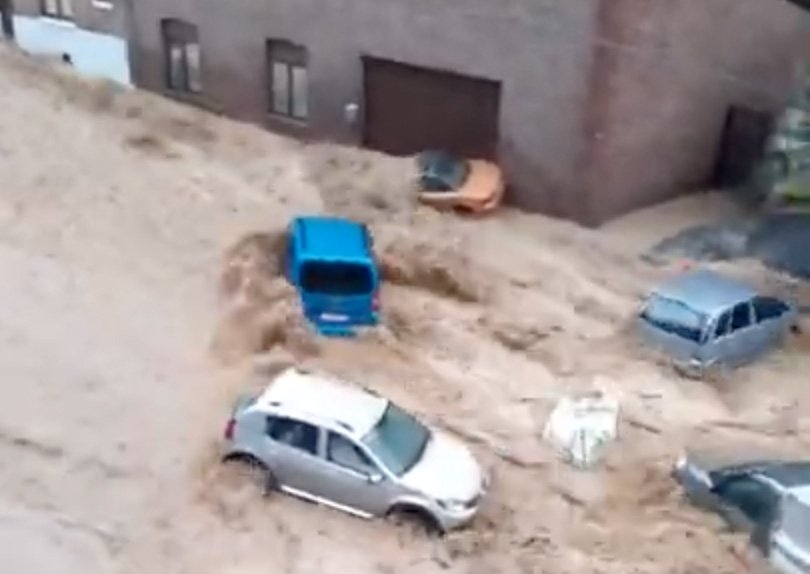 The southern Belgian town of Dinant was hit by the heaviest floods in decades over the weekend after a two-hour thunderstorm turned streets into torrential streams that washed away cars and pavements.

“I have been living in Dinant for 57 years, and I’ve never seen anything like that,” Richard Fournaux, the former mayor of the town on the Meuse, told reporters.

Rainwater gushing down steep streets swept away dozens of cars, piling them in a heap at a crossing, and washed away cobbles stones, pavements and whole sections of tarmac.

There was no precise estimate of the damage, with town authorities predicting only that it would be “significant”, according to Belgian RTL TV.

The storm wreaked similar havoc, also with no loss of life, in the small town of Anhee a few kilometres north of Dinant.

The latest flooding follows the deadly floods earlier in the month that killed 37 people in southeast Belgium and many more in Germany.

The unprecedented flooding across vast swathes of Northern Europe was described as a “wake-up call” with regard to climate change.

“This is already the impact of the climate catastrophe and this is another wake-up call to make us realise: this is already here,” Katrin Goering-Eckardt, the parliamentary leader of Germany’s Green party, told RTL/NTV television.

Indeed, weather experts said that rains in the region over a 24 hour period had been unprecedented, as a near-stationary low-pressure weather system caused sustained local downpours.

Around the wine-growing hub of Ahrweiler, in Rhineland-Palatinate state, the Ahr river that flows into the Rhine burst its banks and brought down half a dozen houses.

Further down the Rhine river, the heaviest rainfall ever measured over 24 hours caused flooding in cities including Cologne and Hagen, while in Leverkusen 400 people had to be evacuated from a hospital.

In Belgium, around 10 houses collapsed in Pepinster after the river Vesdre flooded the eastern town and residents were evacuated from more than 1,000 homes.