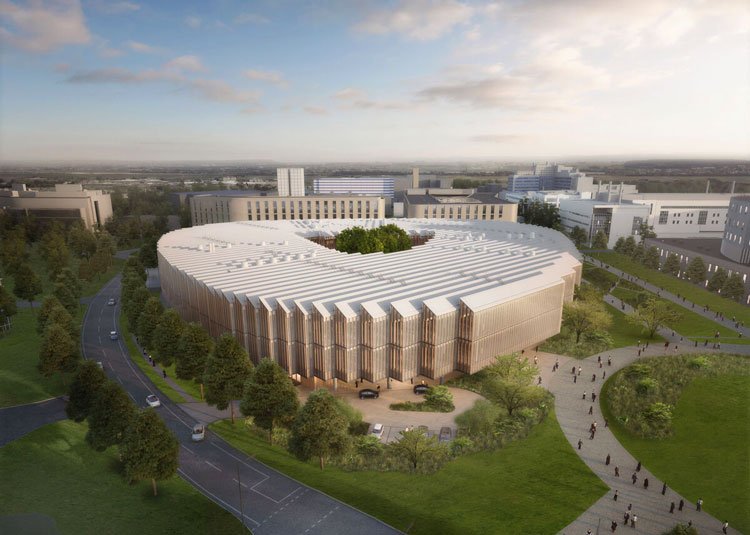 Pharmaceutical giant AstraZeneca has opened a state-of-the-art £1 billion research and development (R&D) facility in Cambridge, as its CEO said the latest spike in COVD infections across Europe may partly be down to the lack of use of the firm’s vaccine.

The Discovery Centre (DISC) will accommodate over 2,200 research scientists alongside the most advanced robotics, high-throughput screening and AI-driven technology.

The firm said the centre will support AstraZeneca’s focus on specialised and precision medicines and foster the discovery and development of next generation therapeutics, including nucleotide-based, gene-editing and cell therapies.

The centre is also viewed as one of the most sustainable of its kind. Beyond the building’s scientific capabilities, AstraZeneca described the disc-like structure as “a feat of environmental engineering” equipped with 174 boreholes to provide natural geothermal energy; four ‘hybrid cooling towers’ and a ground source heat pump that will save enough energy to power 2,500 homes.

Low-energy ventilation and high levels of insulation also help the building’s energy efficiency, along with the ‘saw-tooth’ roof design which minimises energy use by flooding the interior with natural daylight. This energy efficiency is aligned to the Company’s Ambition Zero Carbon programme that commits to zero carbon emissions from its operations across the world by 2025, and for its entire value chain to be carbon negative by 2030.

Pascal Soriot, Chief Executive Officer, AstraZeneca, said: “Our ambition today is to not only unveil a building, but to also drive the next wave of scientific innovation. Our new Discovery Centre in Cambridge raises the bar for sustainable R&D and global collaboration across our industry. It will allow us to break new boundaries in the understanding of disease biology, bring life-changing medicines to patients and power the next stage of our company’s growth.”

The opening comes after Soriot told the BBC’s Today programme that the new wave of COVID infections which is sweeping across Europe may be down the smaller use of his company’s vaccine for the continent’s elderly population.

“When you look at the UK, there was a big peak of infections, but not so many hospitalisations relative to Europe”, he said. “In the UK, this vaccine was used to vaccinate older people. Whereas in Europe, initially, people thought the vaccine doesn’t work in older people.”

Mr Soriot explained vaccines which use mRNA technology, such as Moderna and Pfizer/BioNTech, initially generate a large antibody response, but that protection begins to decrease shortly afterwards.

By contrast, vaccines which use viral vectors, such as the Oxford/AstraZeneca vaccine, may create a strong t-cell response, which he said the “body remembers longer”.