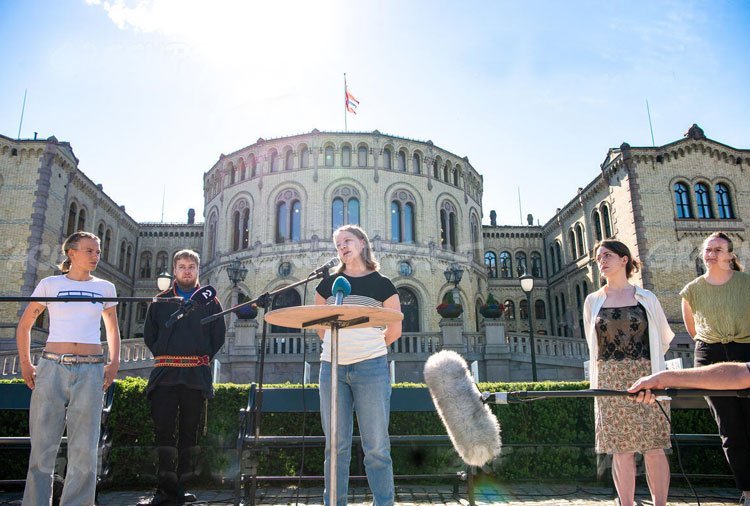 Environmental campaigners have hit out at the Norwegian government which they say has used the impact of the war in Ukraine to seek to get a legal challenge on Arctic oil exploration and production dismissed.

Greenpeace said the Norwegian government has presented a new argument to the European Court of Human Rights (ECtHR) that it should reject the case filed by environmental organisations and six young activists, “using the war in Ukraine to justify a demand for Norwegian oil in decades to come”.

It has prompted a heated response from those who have brought the case.

“The government tries to rid itself of the responsibility an expansion of the oil industry entails in a world experiencing a climate crisis,” explained Gina Gylver, one of the youths behind the complaint and head of Young Friends of the Earth Norway. “However, it can’t escape the fact that continued oil production leads to increased emissions and is incompatible with the Paris Agreement’s targets. It will without a doubt have huge consequences for my future. This case is our opportunity to ensure hundreds of millions of tons of CO2 stay in the ground.”

In its response to the case, the Norwegian government argued that the complaint should be declared inadmissible adding that Russia’s 2022 invasion of Ukraine justifies the search for more oil and gas.

“War in 2022 does not legitimise oil policy from 2016, nor does it justify new production several decades into the future,” said Frode Pleym, head of Greenpeace Norway. “Europe’s response to the war is to accelerate the transition to renewable energy, a transition that is already well underway and will be far advanced when Norway’s undiscovered resources enter the market. The fact that the government uses the war in this way only highlights that it doesn’t take its climate responsibility seriously and that the case belongs in Strasbourg.”

Greenpeace Nordic and Young Friends of the Earth Norway, as well as six young environmental activists, applied to the European Court of Human Rights (ECtHR) in June last year, arguing Norway is violating their right to life by allowing new oil drilling in the Barents Sea. The applicants have exhausted national remedies after the Norwegian Supreme Court rejected their appeal in December 2020. The environmental organisations argue that new oil drilling in vulnerable areas in the Barents Sea is a violation of Articles 2 and 8 of the European Convention on Human Rights, granting every European citizen the right to be protected against decisions endangering life and private life.

“Since the decision in the Supreme Court, the effects of the climate crisis have become more and more evident. Record temperatures, fires and extreme weather events such as floods are becoming more common and more damaging. The ice is melting, the sea is becoming more acidic, and in Norway alone, 2752 species are threatened.” said Pleym.

In January this year, the case was communicated to the Norwegian government by the ECtHR. On average, only one out of every ten applications submitted gets communicated by the Court.

Under the guidelines the applicants will be given a deadline from the ECtHR to file their observations on law and facts from the government response.

The Court could either decide to refer the case to the Grand Chamber, ask the government to submit additional observations, ask the parties to provide additional information or reach a decision on admissibility and the merits.

Currently it is unclear when the ECtHR will conclude the case. The normal processing time is three years, but the decision may come much sooner, as the case is defined as a possible “impact case”, which indicates that a judgement may have a major impact on the Norwegian legal system, the European legal system or how effectively the European Convention on Human Rights works.